Exclusive Interview: It’s all in the family for WILFRED star Dorian Brown 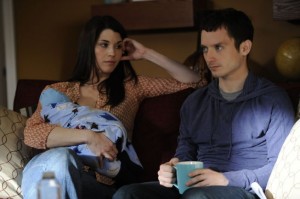 In FX’s WILFRED, Elijah Wood plays Ryan Newman, whose mother is sweet but institutionalized, whose father is scarily intimidating, and whose sister Kristen, played by Dorian Brown, is often demanding, disapproving and imperious. Perhaps this is why Ryan sees his neighbor’s [Fiona Gubelmann] dog Wilfred – played by Jason Gann, who co-created the series with Adam Zwar – as an Australian man in a dog suit. Then again, who knows why Ryan sees Wilfred that way?

Brown says she’s among those who are speculating about this question. The actress, born in North Carolina, was previously a series regular on the series ROOMMATES and has guest-starred on a lot of cult hit series including CHARMED (as the alternate Piper), NCIS, PSYCH and SUPERNATURAL. At a party thrown by Fox and FX at a private club atop a skyscraper, Brown takes time away from enjoying the spectacular view to dish about playing a woman sharing her brother with a dog.

ASSIGNMENT X: How long did it take you not to look at Jason Gann in the Wilfred dog suit, especially when he’s talking?

DORIAN BROWN: Well, I just knew that I had to ignore Wilfred. In the first season, Kristen hated him. So I never looked at him. It was an easy thing where, when he talked, I didn’t listen, I didn’t look at him. It’s gotten harder to work with Jason, because I have more scenes with him. I hardly had any in the first season, and the second season, I have all these scenes. And this season, I’m like, “Oh, my God, I’m realizing what Fiona was talking about. This is no joke.” I was laughing, I was looking in his eyes – I was a very poor actor, working with Jason [laughs]. It took me a while to get it straight, but in the end, I loved it. I hope we have more stuff.

AX: Does it ever seem to you that Wilfred is more like a cat than a dog, in terms of doing his own thing rather than trying to please humans?

BROWN: Dogs are obedient. He’s that way [obedient] with Jenna for sure. Just not Ryan.

AX: How do you feel about dogs in real life?

BROWN: I have two dogs that I love and rescued, and one passed away [late last year].

AX: Kristen can be very hard as a character, but in first season, there was the episode about Ryan’s old dog Sneakers, where Kristen sort of has a breakdown and talks about what she’s like as a person, and this season, where Kristen finally takes responsibility for ending her marriage.

BROWN: I think it’s always really interesting when they show where a character is coming from, so I was just excited to find out more about Kristen and why she is the way she is, is really what I was excited about. I think that when Kristen just got back from India, she really brought it down to reality. I mean, there were definitely some heartfelt moments, but of course there’s still the crazy Wilfred trying to abort her child under the table. It never lost its tone, but it doesn’t stay that dramatic.I actually have the child in an episode – Mary Steenburgen [as Ryan and Kristen’s mother] comes back. I was so excited to work with her, because I didn’t work with her first season at all. But anyway, we didn’t lose that. That episode where Kristen got back from India was extremely to the point and a little serious. That was the most serious Kirsten’s going to get. She loosens up big-time.

AX: Have you come up with a back story for her, to explain why she was the way she was?

BROWN: Well, Ryan becomes a loser. I have a younger brother in real life and if he acted the way Ryan acted, I would whip him into shape real quick. And on the show, our parents are crazy, so I’m the only one left to do it, so I don’t question Kristin’s motives at all, I think she just needs to whip him into shape. She’s hard because she’s a doctor and she’s got a lot of responsibility and she’s a perfectionist as well.

AX: Do you have theories about what’s actually happening on the show, in terms of Ryan’s perception of Wilfred?

AX: And how is it having one of your main writers/producers as your costar?

BROWN: It’s such a team effort. You put a lot of ideas in and everybody listens. So there are no fifteen phone calls. Somebody has an idea, we just do it.

AX: Kristen was pregnant and had a baby this season. How was playing the pregnancy? Did you talk to a lot of pregnant friends about back pains and feet pains?

BROWN: Well, I was pregnant [in real life] first season. They were hiding it. So I knew it and it was fresh.

AX: So you could draw on your own experience.

BROWN: That’s right – I have my own experience and it seems very fresh in my mind.

BROWN: Yeah, exactly. I put on the fake belly and I was like, “God, no, please. This is too soon.”

AX: How did you feel about the episode where Wilfred was trying to make Kristen miscarry?

BROWN: You know, when I understand WILFRED’s humor, I think it’s hilarious, but I was watching it with a group – I had some friends over visiting, and they had never seen WILFRED and I made them watch it, and they were totally appalled by the fact that he was trying to abort my child. I think it’s hilarious – I think eventually they thought it was hilarious, when they got the humor. It’s dark comedy.

AX: How is it working with a real baby, now that Kristen’s had her child?

BROWN: You know what? We tried it for one episode, for one scene, and we had twins, and they were infants, and it was extremely hard, so we ended up having this amazing fake baby that’s so realistic, everyone took pictures of it, and we only used the real ones that one time. It’s much easier working with the fake baby.

AX: The floppy equivalent of CGI?

BROWN: Exactly. It was a really amazing prop. All the prop guys were amazing. We had a [prop] newborn baby for the episode where I actually gave birth, and then a [prop] few-weeks-old baby – really good work.

AX: Is your real baby ever around the set while you’re working?

BROWN: He showed up a couple times. He’s in the walking stage, so he’s a little dangerous, but he did make an appearance.

AX: How was it working with Nestor Carbonell as Kristen’s married boyfriend?

BROWN: Oh, he’s so amazing. I cannot wait to see him in [THE DARK KNIGHT RISES]. Words that aren’t initially all that funny – he makes them hilarious. And you don’t even realize it when you’re working with him – I was watching the episode he was in and he’s just genius. I didn’t even realize he’s doing that and you see it on camera and he’s wonderful.

AX: And do you get any scenes with Fiona Gubelmann?

BROWN: I do. We’re in the finale together. Fiona does a great job.

BROWN: I’m in a movie called HOME RUN. It’s going to be released in the spring. it’s about a baseball player who comes home and he gets in trouble. It’s kind of like SWEET HOME ALABAMA, but the roles are reversed. I’m somewhat of a Little League coach, but I have a relationship with a player.

BROWN: Yeah, I have to work with kids again. Very wonderful, though. They were like eleven and thirteen, they were great.

AX: Anything else you’d like to say about WILFRED right now?

BROWN: Keep watching it – it’s a big mystery. I cannot wait to see what they are going to do. And I would imagine the audience is just as excited. I hope they are. I’m in a very good place, praying for Season 3 and just happy that people are watching the show and loving it.