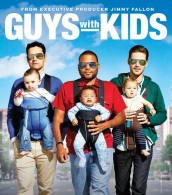 My expectations for the new NBC sitcom GUYS WITH KIDS were surprisingly not high. With three dads wearing babies as a fashion accessory, it just appeared like it would be a one-joke show that would be unbearable and quickly fade away.

However, there’s a great comedic  pedigree behind the show. The series was created by Jimmy Fallon, Charlie Grandy and Amy Ozols who understand comedy quite well and one of the big keys to a successful sitcom is the casting.

And with Anthony Anderson, Jesse Bradford, Zach Cregger as our leads and Jamie Lynn-Sigler, Tempestt Bledsoe, Erinn Hayes (as the wives) it’s a great mix of comedy pros who make even the most lackluster material in the “Pilot” enjoyable.

The characters are standard, but with a slight edge. There’s Gary (Anthony Anderson) who is a stay at home dad with four kids – and it’s starting to destroy his psyche. The nice aspect of this is there’s no resentment for his wife Mamy (Tempestt Bledsoe) – there’s great love there and chemistry and it’s amusing to watch their own bemusement at their kid situation.

Nick (Zach Cregger) comes from the snarky school of character development (think of him as a less smug Jeff Winger played by Joel McHale in COMMUNITY). He gets some of the best lines in the series and also has some wicked comedic timing that should bode well for the show if it hangs in there. His relationship with his wife Emily (Jamie-Lynn Sigler) is also quite strong too – and again, it’s nice to see couples who like each other.

That said, Chris (Jesse Bradford) is the one who gets the harping ex-wife Sheila (Erinn Hayes). She doesn’t trust him and treats him like a child – even as they share custody. She’s shrill and shrewd and Hayes makes her quite funny (although this could get quite grating if the series continues). It’s nice to see the rest of the cast feel the same way about Sheila’s domineering ways as Chris. A running gag involving Kareem Abdul-Jabarr is quite clever too (albeit a bit obvious as well).

I’m not saying GUYS WITH KIDS is a great sitcom, but it does have potential. Fallon and his team are smart to keep the story and comedy moving very, very quick especially by sitcom standards. The pace is good and helps navigate rough waters.

The show is also just a nice fresh of air in a world of cynical, snarky comedies. It’s a smart bet on NBC’s part and if the show can continue to grow and showcase the great cast they’ve put together, this could turn into a surprise hit. After last year’s dreadful NBC’s comedies WHITNEY and ARE YOU THERE CHELSEA? at least the net seems to be on the right track, and that’s all you can ask for when it comes to comedy development.