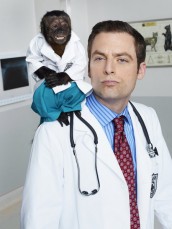 Cliches pile on in a very uninspired NBC sitcom

The new fall season is fast approaching and with it comes a deluge of new shows trying desperately to find an audience. Point in case – the new comedy ANIMAL PRACTICE starring Justin Kirk and JoAnna Garcia-Swisher. Kirk plays a veterinarian set on doing things “his way” to a fault. Garcia-Swisher is his ex who comes back into town after a two-year exit to lay claim on the animal hospital, which was once owned by her newly departed grandmother.

There’s no denying the set up writers Brian Gatewood & Alessandro Tanaka are throwing at us. Two exes working together after a not so great break-up, the tension is thick and the results are obvious. One liners being thrown at each other are reminiscent of a number of successful shows since gone, some still in syndication. It is as if the creators saw something years before that seemed to work and are now trying to mimic that success with their own version, placed in an animal hospital. There isn’t much new to see here, and what is new is too quirky and odd to gain any real originality marks. Kirk walks around with a monkey as his assistant, the staff – with loads of people and their pets in the waiting room – gambles on which animal will win a relay race. It’s hard to imagine that that many people would – picture a “human” ER waiting room – sit around in eager anticipation of their name being called whilst the entire staff parlays their time on wagering. Not likely.

But that isn’t the worst offense for ANIMAL PRACTICE, sadly the lead Kirk is a complete a**. He is egocentric, lazy, crude, selfish and yes, he does care for the animals, which even results in him stealing one – but he is no one you would root for in any circumstances whether it be to get the girl or to be a successful doctor.

The show is also complete with goofy sidekicks, most of who you can’t even believe are intelligent enough to have graduated high school, let alone med. school. But alas, they are there for those infamous verbal zingers thought to be the saving grace when the drama gets too heavy. They’re not.

Cliché after cliché, the only thing original about the show is the location of the been-there done-that premise. I don’t think I’ve ever seen a show based at an animal hospital. So, there’s an A for location. The rest of the series falls into the mediocre category.

The saving grace about the show is Kirk and Garcia-Swisher, whose talents are wasted away on a drivel plot line and stereotypical characters. Maybe when the show gets the axe they can find a better place to demonstrate their talents, where they don’t have to recite recycled lines while a monkey bounces up and down around them. Kirk and Garcia-Swisher deserve better and so do we!