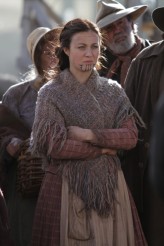 More tables are turned as characters once again change their fates

Well at the end of the last episode of HELL ON WHEELS we left Cullen Bohannan (Anson Mount) in a bit of a bad spot, which is pretty much where the new episode “Durant, Nebraska” picks up…but I want to actually talk about another moment of this episode first.

There is a really well shot, completely speechless moment between Bohannan and the Swede (Christopher Heyerdahl) after Bohannan has surveyed his new living quarters (formerly the Swede’s quarters) in Hell on Wheels. There’s just this silent exchange between the two of them which is a subtle acknowledgment of Bohannan having been put in the very position the Swede once was. The Swede’s actions in that scene are almost an nod of “it’s all yours…have fun….it got me tarred and feathered.” I just thought that is truly one of the best moments of this new season so far, and there was more than just and edge of ominous energy to the exchange.

So speaking of the Swede lets talk about what has happened since his fall from power at the end of season one. Now he’s stuck on chamber pot duty, garbage duty, and undertaker. He doesn’t seem to upset with his new lot in life, and is even finding things to be happy about (sort of) here and there. He’s struck up a renewed friendship with Rev Cole (Tom Noonan) and I have absolutely no idea what that might blossom into. But, just for a minute think about how many people are working at the job the Swede did in the first season. The two Irish brothers are working the management angle of the camp, drawing profits from rent and a bit of a protection racket. Bohannan is going to be the new enforcer for the town, which was also a large part of the Swede’s job, and Elam (Common) is acting as judge, jury, and executioner for criminals in the camp. So in reality that’s four people that it takes to fill the shoes of one man, and maybe that’s why the Swede seems OK with his new lot in life for the time being. Of course, I have no doubts that he will rise back up at some point when everyone least expects it.

How about Lily Bell (Dominique McElligott) officially shacked up with Durant (Colm Meaney)? Ew. Not anything against Colm Meaney, because he’s a nice enough looking guy, but his character is such a sleaze that the idea of Lily hooking up with that every night so she can stay in the West and work on the railroad is pretty abhorrent. Of course, it is pretty obvious the minute she sees Bohannan stalk back into camp she’s more than ready to run right after him. A woman in that time period has to do what she can to survive and Lily is certainly doing that. From taking up with Durant to hiring Elam to find the whore’s killer, she is really taking charge this season.

And last but not least let’s talk about the uneasy understanding between Durant and Bohannan. How long can that last before one of them tries to kill the other off? Durant was a big part in helping make sure that Bohannan either left town or was killed off last season, so it must gall him to have to have the man in his employ and to bring him back to town. This is a powder keg just looking for the right spark to make it go boom, so I’m anxious to see these two deal with each other this season!