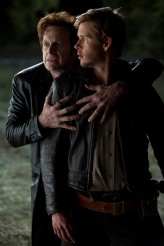 The TRUE BLOOD episode “Sunset” considerably ups the stakes (pardon the pun) in the vampire/human war, and by finale, the faerie community looks as though it’s going to be dragged into the mess, courtesy of – who else? – Russell Edgington (Denis O’Hare).

At Authority headquarters, Jessica (Deborah Ann Woll) wants to call Jason (Ryan Kwanten) to warn him that Russell and Steve Newlin (Michael McMillian) are on the loose. Jessica’s sire Bill (Stephen Moyer) surprises her by refusing, saying that he’s no longer concerned with the affairs of humans any more, including his previously beloved Sookie (Anna Paquin). Jessica, trying to bluff Bill, says she wants to turn Jason – Bill is irritated and sends two enforcers along with Jessica to make sure she goes through with it.

Jessica fake-bites Jason, who takes out the two enforcers with his anti-vampire gun. Jessica realizes that she actually might like to spend eternity with Jason, but he goes off to warn Sookie. Jessica goes to Fangtasia to take refuge with the deeply annoyed Pam (Kristin Bauer van Straten), who relents when Jessica tells her that Eric is with the Authority. When Jessica talks about how Eric and Bill have both gone crazy, Pam tells Jessica this is what happens when a group of vampires stay together and “nest” – they become sadistic and insane.

Meanwhile, Pam’s progeny Tara (Rutina Wesley) has killed the new vampire sheriff of the area. Pam forbidsTarato ever speak of it again. When the sheriff’s maker, Authority councilor Rosalyn (Carolyn Hennesy), comes looking for her progeny,Taracan’t speak the truth. Pam takes the blame for the sheriff’s slaying, and Rosalyn’s storm troopers arrest her. Rosalyn also brings Jessica back to Authority headquarters.

Pam is right about the vampires going crazy. Bill imagines that vampire goddess Lilith (Jessica Clark) tells him that he is the leader she has chosen. However, other vampires are having the same vision. When Kibwe (Peter Mensah) says that he has been chosen by Lilith, Bill literally rips the other vampire’s head off. Salome (Valentina Cervi) also sees and hears Lilith tell her she is chosen.

Nora (Lucy Griffiths), however, has finally snapped out of it and privately begs forgiveness of her fellow-Godric-progeny Eric (Alexander Skarsgard). He promises he’ll get them out of the Authority headquarters and they make love.

Human U.S. Army General Cavanaugh (Phil Reeves) drops by Authority headquarters, demanding that the Authority get the vamps of the world back under control. When he’s told that Roman is dead and the Authority is now Sanguinista (vampire supremacists), Cavanaugh says the government has prepared for something like this and has plenty of anti-vamp weapons. This worries most of the vampires, but when Cavanaugh starts to leave, Eric kills him. This isn’t because Eric was opposed to Cavanaugh, but because this allows Eric and Nora to escape the Authority – they kill the two guards assigned to accompany them and flee into the night.

Shapeshifters Sam (Sam Trammell) and Luna (Janina Gavankar) have infiltrated the Authority headquarters in mouse form in order to rescue Luna’s young daughter Emma, who is currently in wolf cub form (Emma’s a werewolf). Unfortunately, Sam and Luna shift into human form in front of the cages containing naked live humans, who are here as food for the vamps. Sam volunteers to be Bill’s breakfast – he and Pam see each other as they’re being dragged in opposite directions.

In the faerie sanctuary, Sookie is taken to see the Faerie Elder (Erica Gimpel), who is a little flaky due to information overload. We still don’t know the true identity of “Warlow,” the mysterious vampire who may have manifested as a smoke monster under Sookie’s bed and who made a deal with Sookie’s ancestor for the next female faerie in the family, i.e., Sookie. Jason leads Russell and Steve Newlin to the field where the faeries are hidden, but this backfires when the Elder goes out to zap the vampires. Russell drains the Elder and now can see the scared faeries – and Sookie – in the previously invisible shelter.

In other news, Alcide (Joe Manganiello) goes to protect his neighborhood from newly-made vamps and his father Jackson (Robert Patrick) effectively joins in.

Back at Merlotte’s, Sheriff Andy (Chris Bauer) asks his cousin Terry (Todd Lowe) and Terry’s wife Arlene (Carrie Preston) for some marriage advice, as Andy is thinking of perhaps proposing to girlfriend Holly (Lauren Bowles). Andy is completely thrown for a loop when faerie Maurella (Kristina Anapau) shows up, visibly pregnant with the child conceived the last time she and Andy had sex. Terry is astonished, Arlene is appalled and Andy wants nothing to do with the situation. Maurella warns that Andy rejecting her will bring dishonor – and insinuates probably a lot of magical trouble will ensue as well.

With vampires attacking humans across the planet, it seems unlikely that the Sanguinista plotline will be wrapped up in the next episode, which is also the season finale. Since Russell Edgington is arguably the best major villain TRUE BLOOD has seen – Rene Lenier was only human, Maryann was self-destructively crazy, Steve Newlin is, well, Steve Newlin, Antonia Gavilan saw the light and even Marnie had her limits – it might suit the series to keep him around another year. Russell has two qualities that are complimentary but too seldom seen together – power and pizzazz.

Speaking of pizzazz, it will be something of a shame if Russell decimates the faerie nightclub. The dance numbers make for enjoyable backgrounds while exposition is going on in the foreground. That said, it will also be nice to get out of this specific batch of exposition and let Sookie et al get on with it.

As to everyone else, it remains to be seen how or even if Bill can dig himself out of the hole of pious stupidity he’s entered. We can at least hope for a resolution of the “why are so many vampires having visions of being chosen by Lilith,” not to mention how it is that the supply of Lilith’s blood seems to be maintaining itself, despite all that drinking.

It seems like Sam and Luna have a number of options, so the question regarding them is not how will they get out of this but exactly what they’ll do to rescue Emma and escape. The attitude of dogged determination coupled with absolute innocence – neither Sam nor Luna is particularly good at being sneaky – makes their scenes entertaining.

Alcide to the rescue is cool, and Alcide’s dad to the rescue, seeing that he’s played by Robert Patrick, is arguably even cooler. Let’s hope for more action from this dynamic duo.

Overall, “Sunset” is very intriguing, but as Sookie dutifully parses information about her ancestor, vampires kill each other and the world teeters closer to the brink, we want to know what happens, but the journey in this episode is not the end in itself that we might wish it to be.