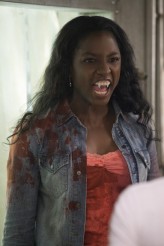 A lot of activity, but not too many humorous or emotional high points this time around

Just in case we weren’t aware of the keen contributions normally made to TRUE BLOOD by Rutina Wesley’s blunt-spoken Tara and Kristin Bauer van Straten’s brilliantly acerbic Pam, the episode “Whatever I Am, You Made Me” drives the point home by muffling both characters. Make no mistake, Tara and Pam are both front and center here, it’s just that they’re both in dead serious mode.

Newly-vamped Tara, having fled from her cousin Lafayette (Nelsan Ellis) and Sookie (Anna Paquin), almost kills a helpless woman changing a tire. Tara gets some self-control and takes shelter with old boss/boyfriend/shapeshifter Sam (Sam Trammell). Sam is flabbergasted, but givesTarahis restaurant’s supply of Tru Blood, then puts her in the restaurant freezer to protect her during the daytime.

The parents of the dead Debbie Pelt come looking for their daughter, whose car was found by Sheriff Andy (Chris Bauer) and Deputy Jason Stackhouse (Ryan Kwanten). Debbie’s parents confront both Debbie’s ex-boyfriend Alcide (Joe Manganiello), who really doesn’t know what happened, and Sookie, who killed Debbie and lies about it. When Alcide shows up at the restaurant to talk to Sookie, it’s nightfall. Tara comes out of the freezer, stays just long enough to tell Alcide that Sookie knows what happened to Debbie, then flees into the night. Alcide is furious with Sookie for not telling him the truth, and Sookie is terrified that he’ll go to the police about the murder.

Jason hooks up with his old high school teacher; they had relations back when he was her student. She feels guilty, but Jason says it was the best thing that ever happened to him. However, after they have sex in the present, the situation is reversed – she’s happy with the sex, while Jason realized that having relations at such a young age made him think of sex as a cure-all for everything else in life.

Vampire Jessica (Deborah Ann Woll) is shopping for clothes but is distracted by the amazing smell of a male customer (Giles Matthey). Her reaction tells us – though not yet Jessica – that the guy is a fairy. Unable to track him down, Jessica stops by Jason’s for a booty call, but Jason is unwilling to have sex. Jessica demonstrates that she’s his friend by staying and listening while Jason talks.

Sookie tries to get Pam to help Tara, as Pam isTara’s maker. Pam is angry that the rift with her own maker, Eric (Alexander Skarsgard), still hasn’t been healed by Sookie. Sookie insists, truthfully, that she doesn’t know where Eric is.

Eric and Bill (Stephen Moyer) are both still in the hands of the Vampire Authority. Roman (Christopher Meloni), the Guardian head of the Authority, agrees to let them live in order to seek out/capture Russell Edgington, who poses a threat to human/vampire détente. Bill and Eric are both fitted with harnesses that have small stakes attached that will go right into their hearts if they misbehave. Salome (Valentina Cervi), the Biblical one, seduces Bill and Eric (separately). When the two compare notes later, they wonder what she wants. Eric’s vampire sister Nora (Lucy Griffiths) confesses under torture to being a Sanguinista, a vampire dedicated to overthrowing the Authority’s coexistence plan so that humans can be treated simply as a food source. Roman, Salome’s lover, wonders how Salome’s protégé Nora could have been so treacherous.

Pam remembers when she first met Eric in 1905San Francisco, when she was the madam at a brothel. Eric chased away two vampires who had been draining Pam’s staff – Bill and Lorena (Mariana Klaveno) – back when Lorena respected Eric’s power and Bill was too vampire-young to respect anybody. This certainly explains Pam’s current dim view of Bill. Eric wants Pam to be his lover – and Pam wants to be a vampire. When Eric is reluctant, saying Pam is asking him to take on a huge responsibility, Pam slits her wrists, so that Eric’s choices are to turn her or let her die. While Pam is contemplating this, she (as Tara’s maker) feels Tara trying to commit suicide in a tanning bed.

Other developments include a depressed Hoyt (Jim Parrack) showing up at Fangtasia in full Goth regalia, hoping to be attacked. Sheriff Andy and waitress Holly (Lauren Bowles) take the next step in their romance. With Nan Flanagan dead and gone, Roman introduces the Authority Council to the “new Nan Flanagan” – that would be the Reverend Steve Newlin (Michael McMillian), who is great at working a media crowd.

Finally, poor Lafayette, already beside himself about Tara’s vamping and the death of his lover Jesus, winds up dumping a bottle of bleach into the restaurant gumbo. Lafayette sees his own reflection as that of a demon and dumps out the gumbo before real harm is done, but he’s greatly shaken.

With no humor coming from Pam or Tara – to say nothing of Ellis’ Lafayette, who has been in a state of increasing emotional trauma for a few seasons now – “Whatever I Am” taps around the fourth wall with several characters remarking on how nice-looking Eric and Bill are. This has the effect of making sex scenes that actually do move the plot forward seem gratuitous, even though they aren’t.

The notion of Newlin brightly working to make vampires seem as wholesome as Vitamin C is pretty entertaining, though it’s also gratifying to see the character show real fear in the presence of the Authority.

Dramatically, “Whatever I Am” works fairly well. It’s interesting to see that Pam’s personality wasn’t greatly changed by becoming a vampire – she got a little tougher and more practical, but those qualities were in her already. There are real sparks of fury and desperation in the confrontation between Alcide and Sookie, with both actors taking it in much deeper and more complicated directions than we expect. Manganiello puts hurt and exasperation as well as anger into Alcide’s reaction and Paquin gives naked panic to Sookie’s admission that she wasn’t ever going to reveal Debbie’s fate. The scene is a confrontation that includes astonishment, shame and a whole host of emotions in something that could have played any number of ways.

There are some perplexing aspects to the episode. When Salome comments that it’s odd that Eric doesn’t try to save Nora, even though she risked all for him, we’re inclined to agree. Are we meant to agree with Salome’s assessment that Eric is too pragmatic and self-protective to endanger himself, or are we meant to be waiting for a shoe to drop? Likewise, between Salome evidently not noticing Nora’s political leanings and her urging Roman to consider compromise, it’s not a huge leap to suppose Salome is really a Sanguinista. If we as the audience wonder about this, why doesn’t the Authority? Granted, since Roman is involved with her, we can see why he might give her benefit of the doubt, but isn’t he too old, wise and power-hungry to be naïve about this?

Finally, we’re impatient for Pam to come around and take on her Maker responsibilities regarding Tara, not to satisfy vampire lore or Eric’s sense of parental propriety, but because those two characters going up against each other could be priceless. Ah, well, stay tuned.

Article Source:Assignment X
Article: TV Review – TRUE BLOOD – Season 5 – “Whatever I Am, You Made Me”

In Memoriam: SPARTACUS star Andy Whitfield passes away at 39 - plus an...
TV Review: DOCTOR WHO - Series 7 Premiere - “Asylum of the Daleks” - R...
iZOMBIE: Co-Creator Rob Thomas gets hungry - Exclusive Interview
THE NIGHT MANAGER: Tom Hiddleston gets his spy on - interview