A very entertaining, eventful episode that moves a lot of storylines forward 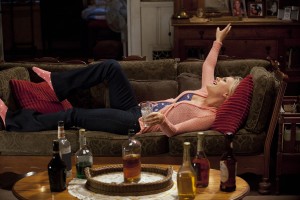 The bad news: we still haven’t found Russell Edgington. The good news: a whole of characters get over themselves and get on with it in “We’ll Meet Again,” an installment of TRUE BLOOD that amps up several plotlines while continuing with the ones we’re following.

At the end of the last episode, newly-vamped Tara (Rutina Wesley) was trying to commit suicide in a tanning bed. Her maker Pam (Kristen Bauer van Straten) feels this through their maker/progeny bond, zips over to Tara’s side and exasperatedly commands her not to do it again.

Werewolf Alcide (Joe Manganiello), Debbie’s ex, goes to tell “the truth” to Debbie’s parents, who are in town to investigate their daughter’s disappearance. Alcide says he lied to them earlier (true), that Debbie was killed (true) but that werewolf pack leader Marcus Bozeman did the deed (false, although Marcus slept with Debbie), and Alcide subsequently killed Marcus (true).

Lafayette (Nelsan Ellis) is so angry at Sookie for telling Alcide that she killed Debbie (this implicates Lafayette as well) that he tells Sookie off, calling her “the angel of death.” Indeed, Lafayette is so furious that he becomes possessed by what looks like an Aztec demon, putting a curse on Sookie’s car so that it accelerates uncontrollably when she’s on her way home from work. Sookie jumps out of the car seconds before it crashes. Eventually, convinced everyone hates her, Sookie decides to get extremely drunk. Realizing what he’s done,Lafayette comes by to apologize and make sure that Sookie is unharmed after the car crash. Sookie is too drunk to understand what Lafayette is trying to tell her about exactly what happened to her car. Then Alcide comes by to explain what he told Debbie’s parents. Sookie is very grateful and still very drunk. She offers Alcide a drink, one thing leads to another, Sookie tells Alcide she knows he’s in love with her and the inevitable kissing commences.

Bill (Stephen Moyer) and Eric (Alexander Skarsgard) are dumped on an empty road and given a car by the Authority. Their first stop is Fangtasia. Pam is beyond relieved to see Eric (and wrongly believes that Sookie got him to come back). However, Eric questions Pam so roughly about whether she had anything to do with Russell Edgington’s escape that Pam is genuinely hurt – she tells Eric if he really doesn’t trust her or care about her, he should dissolve their maker/progeny bond. When Eric gets over his extreme frustration, he gently tells Pam that it’s not that he doesn’t trust her or care about her, but he wants to dissolve their bond to protect her. He is pretty sure that, one way or another, he’s not going to survive the hunt for Russell, and he wants Pam as his legacy to survive. He’s proud of her for becoming a maker (this effectively makes him Tara’s vampire grandfather). Pam sadly accepts Eric’s wishes.

Meanwhile, Bill talks to Tara, trying to get her to accept her vampire state. Tara is very bitter about Sookie, telling Bill that Sookie will always be fine because there will always be somebody to take a bullet for her.

When Pam is finally left alone withTara, the maker brings her progeny a willing donor. WhenTararefuses to drink, Pam compels her, then guides her in how to enjoy feeding while still knowing when to stop in time to avoid killing the human involved.

Bill goes to see his own progeny, Jessica. He’s proud of her. Jessica advises Bill to go see Sookie, no matter what anybody says.

This results in Bill and Eric being outside Sookie’s house just after Sookie and Alcide begin getting closer. It’s unclear if this is out of pique or pragmatism, but Bill decides that Sookie can help him and Eric find Russell. When Eric points out that Sookie doesn’t want anything to do with either of them, Bill says they won’t give her a choice.

In other news, back at Authority headquarters, when Roman (Christopher Meloni) threatens to kill Eric and Bill long-distance, Eric’s Sanguinista rebel sister Nora (Lucy Griffiths) gives up the name of her confederate on the council, the vampire who looks like a little boy. The little rebel is bloodily staked by Roman.

Sam (Sam Trammell) accepts an invitation to go for a run with two fellow shapeshifters, but when he shows up at their home, he finds that they’ve been shot to death.

Old military comrades Terry (Todd Lowe) and Patrick (Scott Foley) go in search of their former teammate Eller, who became out of control inIraqand caused a massacre of civilians. They find Eller holed up in an underground bunker where he’s painted the walls with gigantic demonic images.

Jason and Andy accept a party invitation from the corrupt Judge Clemmons, who has coerced Andy into giving him favors. All three men are blindfolded, so they’re unaware that they’re actually escorted into the Faerie dimension. They do know they’re in a really wild, well-lit nightclub. Here Andy re-encounters Morella, a fairy who previously seduced him in an incident he believed was a dream. Jason is approached by his cousin Hadley (Lindsey Haun), who was once the lover of the late vampire queen Sophie-Anne. Hadley is delighted to hear that the vampires haven’t killed Sookie and Jason – vampires have a taste for fairie blood and Hadley is sure her cousins will be killed if they do not also take refuge in the faerie dimension. Hadley’s revelations to Jason are cut short by an angry faerie superior. Jason and Andy are both kicked out to our dimension again – this time, they can see they’ve abruptly changed locations – and then they’re zapped again by a pair of faeries.

Nobody can accuse TRUE BLOOD of being uneventful at the quietest of times, but “We’ll Meet Again” packs so much in that it’s amazing there’s room for not only all the story points, but for so much emotion. The scene where Eric breaks his bond with Pam so that Pam can survive is surprisingly touching, with Skarsgard and Bauer van Straten generating a real sense of connection. Bauer van Straten carries that into Pam’s scene of teaching Tara how to feed, and it’s actually affecting to see how Pam starts to take pride in what it means to be a maker, just as Wesley lets Tara start to experience vampirism as something other than a curse.

There’s always something knowing and warm in scenes between Moyer’s paternal Bill and Woll’s filial Jessica, and with Jessica so often being flirty and wild, it’s nice to see Woll get a chance to play Jessica as a grown-up when she comes to Jason and Sookie’s aid.

The wry, dry chemistry between Moyer and Skarsgard remains entertaining. While we’re on the subject of chemistry, Paquin and Manganiello have been generating laboratories full for parts of three seasons now, so the Sookie/Alcide get-together feels very well-earned.

Separately, Paquin earns our sympathy in Sookie’s total meltdown and Manganiello makes Alcide’s assertion to Debbie’s parents that he never stopped caring about her so convincing that we think it may be true even after he tells Sookie it wasn’t.

Ellis, no surprise, is great in showing Lafayette’s fury at Sookie and then his terrified remorse when he sees the results of his rage.

The fairy nightclub is, for television, one hell of a production in its own right, with a full Bob Fosse-style choreographed dance number in progress throughout and Cirque du Soleil acrobats spinning up and down what look like long silk scarves. It’s a much more inventive and enticing view of Faerieland than we got in Season Four.

While we have no idea where it’s going, we’re shocked right along with Sam when he finds his friends’ dead bodies, and the paintings in Eller’s bunker are suitably creepy, with some design elements that seem to link back to Lafayette’s demonic visage, which could be interesting.

While it seems like either Salome or Roman himself (he is awfully fond of the Vampire Bible) may be secretly Sanguinista, there’s no denying how thoroughly Meloni owns his character – his Roman could have stepped out of a David Mamet play about cutthroat businessmen. Chris Heyerdahl continues to delight as the Authority council member who offhandedly asserts that he was present for the writing of the Vampire Bible, with its author stoned the whole time.

“We’ll Meet Again” is full of TRUE BLOOD goodness, with enough to hold us over until we meet again next week.