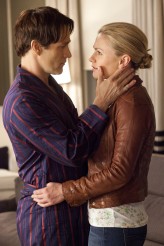 Lots of great scenes, snappy dialogue and the promise of marvels to come in Season 5 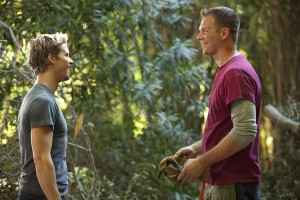 TRUE BLOOD’s fourth season ends with a bang – two in quick succession, actually – and shows plenty of life in “And When I Die,” which disposes of several characters and leaves other in mortal peril. It’s also a terrific ride getting there, with some killer dialogue, hilarious bonding between vampires Bill (Stephen Moyer) and Eric (Alexander Skarsgard), and the touching if brief return of Lois Smith’s Adele Stackhouse, Sookie’s (Anna Paquin) beloved Gran. Oh, yeah, and there’s also Jessica (Deborah Ann Woll) in the Little Red Riding Hood stripper outfit.

That outfit, and many other silly ones (though none other so provocative), is due to the celebration in Bon Temps of Halloween, or as it is known to Wiccans, Samhain. The dead Marnie (Fiona Shaw), who has possessed medium Lafayette (Nelsan Ellis), uses the occasion to sacrifice Lafayette’s lover Jesus (Kevin Alejandro) in an effort to get Lafayette’s brujo power.

Sam (Sam Trammell) says goodbye at his brother Tommy’s grave, where he gets moral support from lover Luna (Janina Gavankar) and an offer of friendship from the genuinely grieving Maxine Fortenberry (Dale Raoul).

Back at Merlotte’s bar, Sookie gets her job back (she doesn’t know that Tommy had shapeshifted into Sam when “Sam” fired her and Sam only just now realizes why Sookie hasn’t been in all week). Then Alcide (Joe Manganiello) shows up. Just broken up with fellow werewolf Debbie (Brit Morgan), Alcide thinks that he and Sookie would both benefit from dating sane people – like each other. Sookie feels like she has enough romantic issues at present.

Marnie-in-Lafayette is now strong enough to overpower both Bill and Eric and chains them to a stake in the midst of the local cemetery. Sookie, Tara (Rutina Wesley) and Wiccan Holly (Lauren Bowles) arrive on the scene and, per Holly’s instructions, join hands so that Holly can do a summoning spell that wakens all the nearby ghosts – including that of Sookie’s Gran. Marnie-in-Lafayette sets the stake’s pyre alight, which so horrifies Sookie that she’s able to fairy-zap Marnie-in-Lafayette. The ghost of Antonia Gavilan appears and puts out the fire (although by now Eric and Bill are both somewhat the worse for wear). Gran yanks Marnie’s spirit out of Lafayette’s body, and Antonia finally persuades Marnie that the peace available to deceased humans is better than the pain of existence, which vampires are stuck with forever.

Sookie heals both Bill and Eric by allowing them to drink from her simultaneously. She then tells Bill she forgives and loves him, and acknowledges to Eric that she’s always been attracted to him and seen the good in him, not just in his amnesiac innocent phase. However, loving both of them, she can choose neither of them. She leaves two very disappointed vampires in her wake.

Eric and Bill wind up at the king’s mansion, where erstwhile vampire spokesperson Nan Flanagan (Jessica Tuck) arrives, three vamp soldiers in tow. She announces that she’s been sent to kill both Bill and Eric, but since she figures she’s next, she’s quit both the American Vampire League and the Authority. Instead, she aims to join the brewing rebellion against the current regime (i.e., she’s about ready to start killing humans rather than drinking Tru Blood) and wants the king and the sheriff to join her. However, she makes the mistake of trying to browbeat Eric and Bill into cooperating by threatening to reveal that Sookie is part-fairy. Eric promptly decapitates the three soldiers and Bill stakes Nan.

Lafayette, back to himself but desolate that he killed Jesus, receives a visit from the ghost of his dead lover, who assures Lafayette that everything is all right and gives him a gentle kiss. Jesus wants Lafayette to live. When Lafayette pleads with Jesus not to leave, the ghost points out reasonably that this shouldn’t be a problem: “Dude, I’m dead. You’re a medium.”

Arlene’s cousin-in-law, Sheriff Andy (Chris Bauer) finally works up the courage to give flowers to Holly, who asks for a hug.

Jason (Ryan Kwanten) finally tells lifelong best friend Hoyt (Jim Parrack) that Jason has now hooked up with Hoyt’s ex, vampire Jessica. Hoyt responds by beating the crap out of Jason (considering Hoyt has just been working with a chainsaw, Jason is lucky that’s all Hoyt does) and saying that Jason has a piece missing. However, Jessica disagrees. She and Jason have great sex, followed by a conversation about taking it slow. After Jessica leaves, there’s a knock on Jason’s door. It’s the anti-vampire Reverend Steve Newlin (Michael McMillian) – who has been vamped himself.

Alcide, a construction company owner as well as a werewolf, is summoned to one of his building sites. Seems there’s a giant hole in the concrete, along with some broken silver chains. Alcide may not know exactly what this means, but we do – Russell Edgington will be back in Season Five!

No sooner does Sam bid a fond farewell to Luna than he’s confronted by a growling werewolf.

Sookie’s house is broken into by werewolf Debbie, holding a shotgun and a grudge – she blames Sookie for breaking up Debbie’s relationship with Alcide (even though Debbie is the one who messed around). When Debbie takes aim at Sookie, Tara pushes Sookie out of the way – and is shot in the head. Sookie wrestles the shotgun out of Debbie’s hands and, despite Debbie’s pleas for mercy, shoots Debbie dead. Cradling Tara’s bloodied body in her arms, Sookie cries out for help.

And that’s plenty to go on. Where to begin with the charms of “And When I Die”? There’s the very affecting performance of Alejandro, begging Marnie not to kill Lafayette and then gently teasing his lover from beyond the grave. There’s Pam (Kristin Bauer Von Straten) having one of her best rants ever, railing against Sookie’s anatomy and her very name. There’s the weird but entertaining Butch and Sundance vibe coming from the two main male vamps (and the truly camp sight of both of them chained up shirtless). There’s Smith as Gran, who has as much warmth as she does moral authority. There’s the can-do-no-wrong brilliance of Ellis putting his own spin on Shaw’s turn as Marnie. There’s the genuine surprise factor of seeing Rene again and of having Rev. Newlin turn up as a vampire. As to the promise of Russell returning, what could be more alluring for next season?

On the other hand, it’s a damn shame to lose Tuck’s grumpy Nan, and it is heartbreaking to lose Tara – by the way, what is it with characters named Tara getting shot on vampire shows? One more and it will be an epidemic. Marnie we knew would not survive the season. It’s unclear whether we’ve lost Jesus, given Lafayette’s special gift.

The construction on “And When I Die” is intriguing. In the first two seasons, the finale wrapped up the main plotline about midway through and then started a new cliffhanger. Season Three concluded things so thoroughly that there didn’t seem to be a cliff. Season Four tries something new, starting the seeds of Season Five well before wrapping up this year. It flows very well.