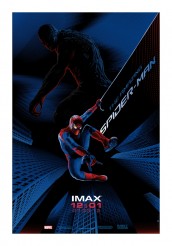 An excellent new version of the Web Head and a spoiler FREE review!

So let’s get the qualifications out there right off the bat with this review. I’ve been collecting Spider-man since I was about 3 or 4 (so a little over 30 years) which actually makes me feel REALLY old, but I know a thing or two about the web-head. Or I can put it out there as my parents phrased it, “our son has loved Spider-man since he could breathe.” So, yes I am an avid Spider-man fan. I buy the comics, toys, statues, etc. and I live amongst a lot of Spidey stuff.

When the original SPIDER-MAN came out from Sony I was wowed. It felt like seeing people I had known my whole life for the first time. Then by the time SPIDER-MAN 3 rolled around, I was considerably less enthusiastic about the film franchise. And, you really can’t pin blame on any one person for the third film, it just ended up being too many cooks in the kitchen and the meal was spoiled.

So as soon as I heard they were re-booting the franchise so quickly I was uninterested to say the least. I thought it was a terrible idea to start all over again and try and tell a new type of Spider-man story when we had already had several years of movies. I was WRONG.

THE AMAZING SPIDER-MAN feels right. It’s as simple as that. Hindsight being 20/20 this is the type of movie that should have started it all those years ago (of course we wouldn’t have this flick if it weren’t for the Sam Raimi Spidey films). The story is modern, realistic (even with a 9 foot tall Lizard), and the characters are instantly appealing.

I’m going to tell you things about the movie in this review without being too terribly spoilerish, but the one thing I almost HAVE to do is compare this outing to the first three in some places –  so please bear with me.

As far as the cast goes, Andrew Garfield IS Peter Parker. He’s likeable right off the bat, and he lacks the whiny sort of wall flower Peter we had for 3 movies before this. It always bothered me that by the 3rd movie in the original series Peter was still whiny and passive – where was his self-confidence? Garfield is an outsider, but a likeable kid next door. With glasses, almost no fashion sense, and permanently messed up hair, he’s an adorable Peter Parker who you instantly root for.

Emma Stone as Gwen Stacy is bang on casting. Again she is far more charming and engaging than her predecessor, and she really is the hot, brainy girl next door. It is impossible not to love her as Gwen, and she is such a damn good actress.

Rhys Ifans as Dr. Curt Connors/ the Lizard is another piece of fantastic casting. He gives us a human being with faults and insecurities and dreams for us to identify with and like before he pulls a Jekyll and Hyde. Thanks to Ifans and the screenwriters the Lizard has a built in humanity, so there doesn’t have to be any clunky artificially inseminated backstory (i.e. Doctor Octopus and Sandman) to make him sympathetic.

Martin Sheen and Sally Fields are a great, modern (more ULTIMATE SPIDER-MAN) Uncle Ben and Aunt May. They seem to be more a part of the modern world and are a lot less caricatures and more just ordinary people. Plus, both of them get in their fair share of great lines. This is not a bag on Rosemary Harris or Cliff Robertson from the original films, it’s just that Sheen and Fields are just a new version of the characters.

The SFX are stunning and the Lizard is a thing of beauty. The CGI used to create him is absolutely amazing! Scenes where he is battling Spider-man, and his arms are clutching the web-head, the scales look so real you can’t tell that he was inserted in post. I have absolutely no problem with the design on the Lizard, and seeing him move on film, he just looks NEAT.

Spider-man’s web swinging and wall crawling are a lot slicker this time around. There are lots of comic book panels inserted into key moments of Spider-man in action, and if you’ve been a long time reader you WILL know when they happen. Plus keep a sharp eye out for mentions and glimpses of Norman Osborn, and there is a hologram in Connor’s lab that has certain key animals in its tree that just might tip off future villains!

This movie is well made, well scripted and directed. It’s just a good movie, and the focus is on the relationships between Peter Parker and the other characters. This isn’t a comic book movie that exists solely as a slugfest between our hero and the villain of the hour. In fact the Lizard almost seems incidental in this film, and you get more wrapped up in Peter’s day to day and Gwen. So when the Lizard shows up, he’s like great icing on the cake.

If you get the chance to see THE AMAZING SPIDER-MAN IMAX 3D, do so! The cityscapes and the web swinging alone are worth it. A lot of films I have seen in IMAX still have some cropping at the top and bottom, but I wasn’t really aware of that sitting and watching THE AMAZING SPIDER-MAN. The movie is visually breathtaking with the nighttime New York cityscape as a backdrop for much of the action, and a lot of this movie takes place at night, so the colors and shadows have all kinds of brilliant contrasts on the screen.

This movie is more ULTIMATE SPIDER-MAN with flavor from the 1960’s AMAZING SPIDER-MAN thrown in here and there. It’s a modern telling of a 50 year old story, and it works really well. In some ways, to me, yes this is better than the original film series, but this is a completely different way of telling this type of story. So really this film is simply different from what has come before, and, in this case different is good.