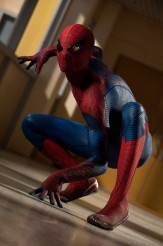 Answering what fans REALLY want to know ... how closely does this new flick match the comic books? 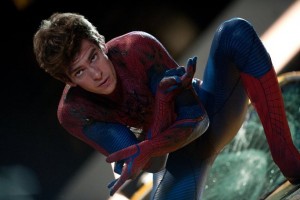 THE AMAZING SPIDER-MAN, is almost here and this new version of the web-head is unlike any we seen before. Director Marc Webb is re-booting the popular Sony Pictures franchise with a more modern take on everyone’s favorite wall crawler now played by Andrew Garfield.

In the new film Peter Parker has to grasp and grapple with the mysteries surround his parents’ past, and deal with the great power and responsibility that comes with becoming a super hero. His main nemesis in the film is The Lizard (Rhys Ifans), a mutated creation which is the result of Dr. Curtis Connors experimenting on himself in an effort to regenerate a lost limb.

Jerome Chen is the new Sr. Visual Effects Supervisor on the film, and even though he has been with Sony Image Works for years, this is his first SPIDER-MAN film! ASSIGNMENT X got the chance to chat with Chen and pick his brain about the challenges of bringing a fresh new vision of Spider-man to the big screen and where the biggest problems in translating a comic to film can come from.

ASSIGNMENT X: Was character of The Lizard the most difficult part of doing the digital effects for THE AMAZING SPIDER-MAN?

JEROME CHEN: When I started on it I thought The Lizard was going to be the hardest part, but it actually wasn’t THE hardest part. The hardest part was defining how Spidey was going to move in this one to make it different from the others, and also the digital New York City, just the scope of that. It really had to have a presence in stereo, because we really want Spidey to play thirty to seventy stories above ground and really use the stereo to give the effect of what it would be like to be moving and swinging at that height. That actually became a much bigger ordeal. The Lizard was cool, but he didn’t turn out to be the hardest one.

AX: Spider-man seems to move faster and more fluid than in the previous series of films. Was there less wire work in this movie and more digital creation?

CHEN: When Marc Webb and I were talking about it initially, he said he wanted to do as much practical wire work as possible in the movie. A lot of the movements and inspiration taken for Spidey was taken from a stunt that was shot in New York underneath an elevated bridge. Andy Armstrong, the stunt coordinator, built this really long truss and actually had a stuntman traveling down a track swinging, then letting go, and basically having to catch the next line, kind of how Tarzan would swing. Watching this guy do it, there was a really interesting rhythm, because he would swing really gracefully and then when he was at the top of his arc at the end of the line, he would have to let go, aim and shoot another web, and then catch the next one. So the rhythm became very fluid and then into staccato to catch the next one and then back into fluid. The moment where the body is at zero gravity Marc used to call going negative, that moment was really important to him to carry on into all the other animated versions of Spider-man. He becomes more fluid in the movie as he becomes more comfortable in his powers, so he moves quicker. He may be super human but it still feels organic. He can’t fight the rule of gravity – he still has to obey them. He has to use his speed and strength to overcome gravity.  The inspiration may have come from this practical stunt piece and we extrapolated from that. It’s interesting you say he moves faster, because at some point we have to satisfy how an audience expects a superhero to move – otherwise it would be disappointing and look fake. 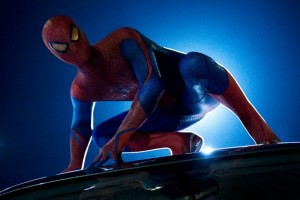 AX: Was there any particular Spider-man comic or artist that you looked at as a source of inspiration for the look of the movement?

CHEN: We looked at ULTIMATE SPIDER-MAN a lot. We went with the more recent artists, and we tried to look for poses that would translate to the next pose without it looking too much like key frame animation. We did almost no motion capture for Spidey’s movement. Even though you think it would make sense, it became a little limiting in terms of chaining the animators to do what was humanly possible. We wanted to make something up completely. When you think of it what artist comes to mind?

AX: I would have to say Mark Bagley, who was an artist on THE AMAZING SPIDER-MAN for years and then ULTIMATE SPIDER-MAN.

CHEN: One of the trailers there is a shot of Spidey almost in slow motion with a helicopter behind him and we called that the Bagley shot. We definitely used him a lot, in fact the end of the movie has Spidey swinging and doing really over the top acrobatic movements between two buildings. He comes out between them and swings toward us and we go into super bullet time and his hand is outstretched and his is firing a web right at camera. That is definitely a Mark Bagley sequence. Or at least inspired by him.

AX: Are there problems in trying to match the way Spider-man moves in the comics?

CHEN: It’s interesting because when we try to match some of these extreme poses and still keep the physical form of Spider-man, so that you aren’t squishing him, you would have to use such an extreme wide angle lens to get those types of poses. The background and everything behind him became distorted and it didn’t fit the movie. The rest of the movie is shot with a normal lens. So we would have to find ways to make these poses happen in a more natural way without going to extreme wide angle lenses. So that was difficult to make that work and again to not deform his body. We did have to intercut quite a bit with the stunt guys and Andrew Garfield in the suit. We had to make sure that nothing popped so when you would go from CG and something really faithful to a comic book panel to something that was photographed; that you didn’t get a weird disjointed moment watching the sequence. I feel really good about how that blends together. You’ll go between full CG and shots of Andrew landing and reacting in the suit with little or no difference.

AX: Was it a benefit that Andrew Garfield was such a Spider-man fan?

CHEN: Andrew was amazing. He brought so much to the character because he was a Spidey geek also. He was very picky about if Spider-man was wall-crawling, the pads of his fingers were on the surface, but the palms were off the surface. He wanted to make sure the finger joints had that classic Spider-man curl, which if you tried to do yourself you might rip some tendons in your fingers. [Laughs] Andrew was really good at those poses. We would have an animation that was almost final with the weight and the physics and then you would notice the palms were on the surface and we’d have to go back and tweak it to get all the details. That was a cool and a fun part of it. It was hard to find for awhile because the motion could look like what you imagine a super hero could do, but it might look too cartoony or fast or not heavy enough. You had to find that balance.

AX: How much of a specter was there from the original three SPIDER-MAN films while you were making THE AMAZING SPIDER-MAN which is a re-boot?

CHEN: When I first talked with Marc, one of his mandates in order to preserve his fresh vision of this version of Spider-man, he really didn’t want anybody who had worked on the previous SPIDER-MAN films. Not because he didn’t like them, but because those films were so distinct and he needed to do something fresh. I thought you would want to bring out all of those people so you would already know what the learning curve was ahead of time. But it would be hard for any of those people not to bring something artistically, and those versions into this movie because you couldn’t help it. It made sense to me that he really wanted to protect his take and even he had to resist doing something that was really cool from the original three films. He did an amazing job just having his own version of it. Having worked at Sony Image Works all of these years and having friends that worked on the other films, I was one of the people that hadn’t worked on those movies. Some of my artists did and in that respect it was helpful to ask what they had done on the others. By virtue you could bring over the technology and advance it. One of the things was the look of the New York buildings. We had a lot of city builds, especially whereas most of this movie takes place at night and the other films had a lot of daytime action scenes. We had to look at how we wanted New York to look at night and how to create imagery that matches the photography that was captured to make sure they all worked together in the movie.