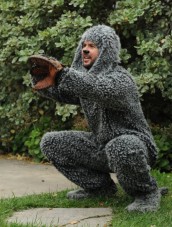 Last week’s bridge episode notwithstanding, “Letting Go” is the official first episode of WILFRED’s second season. While we spend a fair amount of time wondering who is going to let go of whom, or what, we can actually track what’s happening here. Not only do we remain in a single reality throughout, but Wilfred (Jason Gann) and Ryan (Elijah Wood) stay pretty consistent in their desires throughout the episode, with Wilfred for once not attempting to screw Ryan over.

As the episode opens, Ryan goes to visit neighbor Jenna (Fiona Gubelmann) on the day her fiancé Drew (Chris Klein) brings Wilfred home from three months of recuperation in Wisconsin. (Wilfred was hit by a car at the end of last season.) Ryan still has a desperate crush on Jenna and wants Wilfred’s help, but Wilfred is still mad at Ryan – and currently desperate for Drew’s approval. Drew thinks Wilfred is just a silly dog, which hurts Wilfred’s feelings.

However, on the beach, Ryan and Wilfred encounter “two guys” – i.e., a man and a golden retriever – who are planning to enter a dog agility contest. Wilfred gets highly competitive, to the point where he insists that Ryan buy him illegal steroids. Ryan does this, but draws the line when Wilfred wants to down the whole bottle. Ryan says he would rather let go of Wilfred’s friendship than allow the dog to hurt himself. However, Ryan manages to psych Wilfred up for the competition. Wilfred of course blows it by misusing practically every item on the obstacle course, but he’s proud of himself anyway.

Wilfred suggests that Ryan plant the steroids among Drew’s possessions, which will cause Jenna to break up with him, but Ryan doesn’t want to use those tactics any longer. Instead, he’s responded to a flirtatious co-worker (Allison Mack) by asking her out for supper. Wilfred reflects on his old romantic relationship with Jenna’s previous couch

“Letting Go” has some surprising moments right up front, where Ryan sees a dog (not Wilfred) as a dog. Wilfred then interacts with other dogs, portrayed by actual canines. There’s something very funny seeing Wilfred trying to interact with dogs who don’t respond to his bluster. It’s also a pleasure watching Wood observing all this, letting us see Ryan’s puzzlement and curiosity as he doesn’t know what’s going to happen next any more than we do.

Mack (previously from SMALLVILLE) seems like she’ll be around for a few episodes. Her brand of humor is appealing and she instantly strikes a spark with Wood’s Ryan, even if Ryan is at first slow to respond.

It’s also a pleasure to see Ryan and Wilfred behaving in ways that don’t make us scratch our heads. They don’t have to be lovey-dovey best mates, but things on this series are trippy enough without us having to wonder why the characters are inconsistent and/or suddenly mean for no apparent reason. Here, we know that Wilfred is hurt and wants to manipulate Ryan, Ryan knows this and wants to use Wilfred to manipulate Jenna but also actually misses Wilfred, and events proceed logically from here.

“Letting Go” is an ironic title for an episode that lets us embrace WILFRED a bit more tightly.