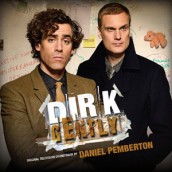 DIRK GENTLEY is novelist Douglas Adams’ “holistic detective” turned quirky BBC sleuth solves his cases through quantum mechanics, or the “fundamental interconnectedness of all things” as he puts it in befuddled layman’s terms. Ditto the seemingly crazy-quilt musical ideas that have no doubt filtered through the prolific documentary and TV credits of British composer Daniel Pemberton, a potpourri that coalesces into a singularity of unique, and charmingly hip sound for this neatness-challenged Sherlock and his consistently amazed Watson

Think the zither quirk of Anton Karas’ THIRD MAN soundtrack as pumped up with the rhythmic retro r & b of David Holmes’ various OCEANS 11 scores, and you might just grasp the anachronistic swing of Pemberton’s work. Like such other BBC musical wonders as DOCTOR WHO and SHERLOCK HOLMES, Pemberton’s GENTLY cheekily throws the age-old sound of fantastical adventuring and detective work through a blender of old and new school musical approaches, combining Baroque chords with throwback sci-fi synths, voices, oddball orchestrations and percussion (involving kitchenware)- an innovative mix that becomes something akin to a stripped-down, acoustic geek jazz set.

DIRK GENTLY‘s jam session flows quite nicely to capture a season’s worth of ironic Victoriana stuff for this Movie Score Media album, resulting in toe-tapping, too cool for school spooky-fun weirdness that will make the listener question what the heck this soundtrack is about, let alone their interest in watch both the show, and hearing what other quirky tricks that Pemberton might have up his sleeve.

Click on Link: To Purchase the DIRK GENTLY soundtrack