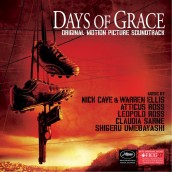 While Mexico City might be a hive of scum and villainy, it’s also a criminally fertile location for multi-character movies like AMORES PERROS, where jumping between time and stories are par for the criminal course. While this kind of fluid structure now almost the norm for morality fables on any side of the border, DAYS OF GRACE (or DIAS de GRACIAS) has the novel idea of having different composers segue between the 2002, 2006 and 2010 World Cup games, each bringing their own unique tones to the kidnapping, torture and murder within.

Up for the first goal kick are Aussie musicians Nick Cave and Warren Ellis, who bring their agonized strings, distended pianos and tortured samples to bear. If Cave and Ellis had achieved an experimental weirdness with THE PROPOSITION and THE ROAD, DAYS OF GRACE pushes their nerve-rending sound to even more unsettling places. Ditto the angry, evocative approach taken by Claudio Sarne, Leopold Ross and Atticus Ross, the latter being the co-composer of SOCIAL NETWORK and DRAGON TATTOO fame. Ross and his players employ a rhythmic, rock-oriented approach that’s no less disturbing, if a somewhat less apprehensive listen- one that you could definitely imagine playing on Elisabeth Salander’s iPod.

But just when you think DAYS is heading into utter hopelessness, the three-part score (with judicious bits of Latin dialogue) makes its field goal into slightly more conventional territory, courtesy of Shigeru Umebayashi (HOUSE OF FLYING DAGGERS). Aching violins, percussion, a solo piano and a poignant orchestra powerfully convey DAYS‘ wages of sin, finding tender, melodic poetry in the worst humanity has to offer. Topped off by the most surreally anti-romantic version of “Summertime” heard yet (intoxicatingly rocked out by Scarlett Johansson and Massive Attack’s Robert “3D” Del Naja), DAYS OF GRACE proves to be both an enthralling concept album that ties together its pained viewpoints of the criminal underbelly into an alternately harsh and soulful musical meditation on the human condition.

Click on Link: To Purchase the DAYS OF GRACE (Original Motion Picture Soundtrack)