The actor/co-creator on the differences between U.S. and Australian television - and Wilfred's stuffed animal fixation 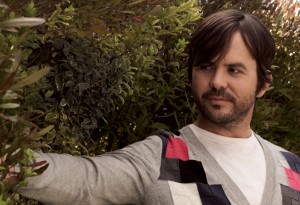 To employ a cliché, Jason Gann is a lot better-looking in person than he is on television. To be fair, this may have something to do that when he’s on television, he’s playing the title character in FX’s Thursday 10 PM comedy WILFRED, so he’s dressed in a fuzzy black-and-white dog suit with floppy ears and a painted-on black nose. This is because Wilfred is a dog, although to his owner’s neighbor, Wilfred looks and talks like an Australian bloke in a dog suit.

Not that this is one of Hollywood’s more time-consuming transformations, Gann notes with a laugh. “It’s just a black nose that gets painted on. That takes about fifteen minutes. And then it takes me about a minute to put the suit on. It’s not a lot of effort – it’s the non-effort that I think makes the suit look so good.”

Gann co-created WILFRED with Adam Zwar as a short film in their native Australia in 2002. Gann originated the role of Wilfred and Zwar played the fellow who sees the canine as a human in a dog outfit. The short became a 16-episode series for Australian television in 2007. This year, FX premiered a new version of WILFRED, with Gann reprising his role, Elijah Wood as Ryan, who sees Wilfred as a man, and Fiona Gubelmann as Wilfred’s sweet but oblivious owner Jenna.

ASSIGNMENT X: Do you play Wilfred any differently in the American version than in the Australian version?

JASON GANN: Yeah, he’s really grown. We’ve noticed halfway through the shooting of [the American version] that Wilfred had a lot more moments of brightness and joy and there’s just a lot more different shades to Wilfred. In the episode where Wilfred becomes sort of a maniacal chemistry saboteur and wears a monocle and goes all British, and [in the episode when] he gets possessed by the ghost of Ryan’s dead dog, I’m really getting to stretch out as an actor and show some of my skills from back in my theatre days. And that certainly wasn’t in the Australian WILFRED. I’m really excited about it. 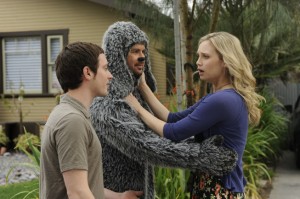 GANN: Droll, and just sort of dark. And that’s definitely in this WILFRED. I think why in a way we hit the ground running from the pilot on is that putting on the Wilfred suit is like wearing an old shoe. I knew what worked with Wilfred and now I’m getting the opportunity to take him beyond that.

GANN: [American television] is run by stories, and so the story makers, the people that create the stories, are treated kind of well. In Australia, it’s tougher. There’s still a mentality of, if you’re an artist, then you are unemployed or a daydreamer. Generally, it takes people to come to America and be successful before Australians can say, “Ah, he’s made it.” Also, a lot of the Australian industry survives on government funding. It’s similar to Canada. Whereas in America, it’s a business. You live or die by how good you are. I just love working here. I’m stretched constantly in the writers’ room, I learn working with Elijah all the time, every day is a joy to come to work.

AX: Do you and Elijah Wood rehearse and/or discuss what you’ll be doing much beforehand, do you just read the script and then surprise each other when the camera is turning?

GANN: Well, I’m in the writers’ room, so I kind of have an idea of what’s coming up, but I forget as well – we shoot an episode every four days, it’s a really tight schedule. So we don’t really have time to [rehearse a lot] – half of the scripts, we didn’t even have a reading before we [shot them]. So by that stage, we really have a good feeling for the show and we just so enjoy it, both of us, as actors. So not a great deal of pre-planning goes in. We just throw ourselves into it.

AX: And what does David Zuckerman bring to WILFRED creatively?

GANN: Oh, he’s really smart. He’s a super-intelligent guy and I hear from the other writers that he’s known as one of the most thorough story guys in town. I come more from an instinctive comedic “if it’s funny, it’s right” way, whereas for David, the story has to stick, the story has to make sense, the story comes first, and then we make it funny. So somewhere in between, he’s made me think about story in a way that I didn’t before, and I’m a better writer for working with him. 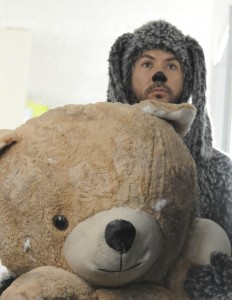 AX: Wilfred as a character has some very, er, unconventional relationships with stuffed animals …

GANN: He has the ongoing relationship with Bear, the teddy bear – well, he meets Raffi, who’s a stuffed giraffe, and he’s obsessed with her, he’s got a very close chemistry with the giraffe.

GANN: Yeah. People write to me all the time about it and someone even recently on the fan page sent a picture of their dog doing it with a little teddy bear and said, “He’s been watching too much WILFRED.” Where the teddy bear thing first came from, and that’s something I did bring over from the Australian version was, the first ten minutes of the [Australian] pilot was [the WILFRED] short film. I saw this a big teddy bear in the house where we were shooting. We shot this all on film and I said, “Hello, we’ve got to save enough film for a minute. I’m going to do something with that bear.” And so we did and in the end, I have the bear sitting there and Wilfred is smoking a cigarette, he’s frustrated at the fact that he’s losing the girl to the guy, and so he just punches the bear in the head. I wanted that to be that status thing, the pack animal that’s being demoted finding the next lowest thing to him.

I’ve got two cats, and we got a little fluffy [stuffed animal] dog that my costar Fiona gave me. We call him Wilfred. These two cats beat the living shit out of this dog. It’s so funny, watching them carry it around and beat it up. Basically, in my place, I’m the alpha. The boy cat is the next one down, the sister cat is the lowest, and so she beats the hell out of the stuffed toy dog. And that’s what I wanted Bear to be. It’s like, what do you do when you’re the bottom of the food chain? You find someone even lower to kick.

AX: Wilfred is sort of encouraging Ryan to go for Fiona romantically, and yet we know that Wilfred would be deeply, deeply unhappy were anything to happen there. Or is that an inaccurate reading of the situation?

GANN: No, I think that’s a very good assessment of Wilfred’s motivations. It’s, I don’t know, better the devil you know than the devil you don’t?

AX: Fiona has a boyfriend, Drew, played by Chris Klein. Wilfred hates Drew, so why doesn’t he ever go for Drew’s throat?

GANN: I think Drew is just dominant. It’s been suggested that there’s an element of cowardice in Wilfred. I think that he’s just not strong enough. I think in the play-fighting that [Drew and Wilfred] do, Wilfred is taking it really seriously, but Drew has got his measure. I wanted a lot of it to have that element of when two kids are playing, fighting, and the older guy is not taking it seriously at all and the younger brother is just punching and putting everything into it. I just wanted to get that dynamic, and I think it worked well.

AX: And is there also an element of that Wilfred doesn’t want to do something that would really upset Jenna? Because if Wilfred bit her boyfriend, she’d have a problem.

GANN: No, I think he’d bite the boyfriend and worry about Jenna later. He’s kind of got Jenna right where he wants her. He can pretty much get away with anything with Jenna thus far in the series, but that’s something that we explore later on, the bond between Jenna and Wilfred. Because Jenna spends a lot of time away from Wilfred, and as we’re writing the show, we realize, well, that’s got to affect Wilfred. Does he feel abandoned? What is his loyalty to Jenna by the end of Season One? 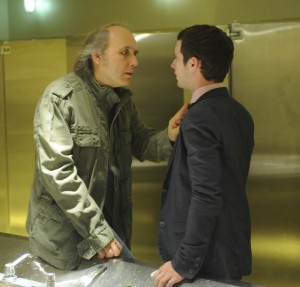 GANN: [laughs] You never know! But the Jenna character is safe for now. I think in a way he kind of is Ryan’s dog already. They’re best friends.

AX: The episode where Ryan beat Drew at tennis to show Fiona that Drew had rage issues and Fiona temporarily broke up with Drew, Ryan had a fit of conscience, in that he’d manipulated Drew into a situation where he’d show his true colors. Were we meant to be on Wilfred’s side on that one? Not for Wilfred’s reasons, but thinking, “If Drew has that side, Ryan’s conscience is steering him wrong”? Because if Drew reacts this badly to losing,, it seems like he could be a danger to someone smaller than him, i.e., Fiona.

GANN: Well, that’s a good point. I think Drew is not without redemption, and Drew is actually making efforts, making progress, until Ryan gets in the way of that progress. It’s like spiking a recovering alcoholic’s drink with alcohol, or putting them in a situation where they’re in trouble. So I think we are supposed to agree with Ryan to a degree. As far as sympathizing with Wilfred, I think it’s always interesting when the bully gets bullied. Wilfred is a real bully, and when you see Wilfred get bullied, it’s funny, but at the same time, you’re like, “Oh, this makes me feel uncomfortable. I’m not used to this dynamic.”

AX: What would you most like people to get out of WILFRED?

GANN: For many years in Australia, I was doing what I’m doing now, but I could’ve earned more money working full-time at McDonald’s. And it was tough. I’ve had some tough years in Australia, and there’s times when you really want to give up. I remember really struggling in the mid-Nineties, and I saw some dark days, and I lived for SEINFELD every night at seven o’clock. For half an hour of that day, I was a happy man.

And so if I can make people feel that way now, that is the reason that I do it. And I’ve had people write to me and say that’s how they feel. One guy wrote and said the last two weeks has been the worst two weeks of his life, the news he’s had, the things that have happened to him, and he said, “But thank you for being there, because it feels like you’re a friend and you’ve been there for me.” I wrote back to him and I said, “That is exactly why I do this, and you’ve just totally made my day.” And that’s what I want people to get out of it. That’s why I do what I do. I want [the audience] to feel good.

AX: Anything else you’d like to say about WILFRED?

GANN: I’m a fan of WILFRED. I’ll forget that I am Wilfred, and then I watch the show. I’ll start laughing again as well. It’s a lot of fun to be working on your favorite show.