Single Review: Erasure – “When I Start To (Break It All Down)” 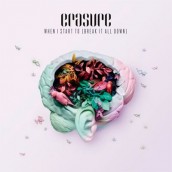 Single Review: Erasure – “When I Start To (Break It All Down)”

While many modern pop artists look to the 1980s for inspiration (Lady Gaga, Katy Perry, The Killers, etc), the artists that were part of defining that decade (and are still viable artists) are few and far between.

There are the warhorses (Madonna, Bruce Springsteen, etc.), but groups amazing, ahead-of-their-time groups like Depeche Mode and Erasure forged through their electronic-infused work throughout the 1990s and the 2000s with their musical integrity intact and a constant forward momentum.

I’d say Depeche Mode has experimented the most in this time, but the Erasure duo of Andy Bell and Vince Clarke (who was one of the founders of Depeche Mode) are still the most pop-happy of them all.

They have their new disc TOMORROW’S WORLD arriving on October 4 and the first single “When I Start To (Break It All Down)” dropped this week.

It’s a swelling love gone wrong song about analyzing what happened with a relationship and if there is anyway to repair the damage done.

What’s most surprising about this track is how closely it feels part of their 1980s cannon, but still feeling fresh and modern at the same time.

Clarke and Bell are no strangers to being hook happy, and the song has a great hook, while employing some vintage synth sounds that have been a defining part of their catalog.

Bell’s vocals are as sharp as ever, and dare I say more focused. He takes his voice in  brand new places and proves he’s a perfect foil to Clarke’s electronic swirl which almost dares Bell to reach high notes he hasn’t attempted before.

It’s nice to see groups like Erasure and Depeche Mode still together and making great music all these years later – embracing the past yet still moving forward into the future – the way it should be.

Article Source: Assignment X
Article: Review of new Erasure single “When I Start To (Break It All Down)”

Tags: "When I Start To (Break It All Down", Andy Bell, Depeche Mode, Erasure, Mute, single, Tomorrow's World, Vince Clarke