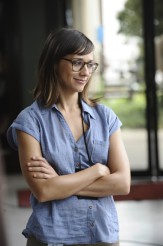 One has to hand it to the writers of WILFRED. They consistently come up with roundabout, intricate ways for Elijah Wood’s character Ryan to learn important life lessons after being repeatedly manipulated and abused by his neighbor’s dog Wilfred (Jason Gann), who Ryan and only Ryan sees as an Australian man in a dog suit.

Conceptually, the notion of Ryan being taught that he shouldn’t court the opinions of others, especially based on false pretenses, is a wonderful parody of the sort of Saturday morning TV show that actually features people dressed in animal suits. It’s just that it seems to lose something in execution.

In “Respect,” Ryan determines that he and Wilfred should volunteer at a local home for the elderly, whose supervisor (Rashida Jones) caustically observes that most people come in so they’ll feel better about themselves and quit after one day. However, she changes her tune after Wilfred cuddles up to a resident who passes away. Everyone starts to believe that Wilfred has the “gift” of being able to detect when someone is about to pass away.

With the supervisor and Ryan’s crush/Wilfred’s owner Jenna (Fiona Gubelmann) carrying on about what a “hero” Ryan is for bringing Wilfred to the home, Ryan is loath to call it quits, even when Wilfred starts digging into the facility’s pharmaceuticals. However, when Ryan suspects that Wilfred may be helping some senior citizens in the great beyond, he’s willing to set the record straight – but is saved from doing so when one of Wilfred’s apparent victims turns out to be a legitimate, note-leaving suicide.

Wilfred’s antics have led Ryan to a mental state where he realizes there are many worse things than people thinking he’s a dilettante. The structure is excellent and Wood and Gann are both marvelous. It’s just that after five episodes, Wilfred’s bullying, manipulation and general unpleasantness are such that it’s becoming hard to understand why Ryan seeks out his company. If Wilfred’s human traits are just Ryan’s fantasies, then he can’t get away from them, but it’s still hard to fathom Ryan seeking out this particular form of abuse. If Wilfred is an independent agent, it’s even harder to understand Ryan’s continued willingness to place himself in harm’s way.

It’s been awhile since we’ve seen them actually having fun (in terms that most people recognize the word) together – it may be time for Ryan to get some fleeting moments of something resembling friendship out of this deal. Among other things, it seems fairly useless for Ryan to learn about standing up to other humans when he is constantly pushed around by a canine, especially when he now has ample reason to know better.

“Respect” has a strong structure and actually lays the right groundwork for the point it makes. It just doesn’t do it in a way that is especially humorous – although it does score a few laughs when Ryan nervously ask if others are sure a note was written by a human.