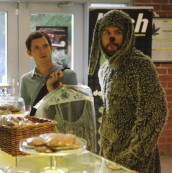 An episode with some great sight gags, if a slightly surprising underlying premise

In WILFRED, a lot of things are in flux a lot of the time, including everyone’s motives and emotions. That’s probably to be expected when the show is about a young man who sees his neighbor’s dog as an Australian fellow in a dog suit. It’s easy to accept that Wilfred (Jason Gann), especially when he feels neglected by owner Jenna (Fiona Gubelmann), would be happy to skip off with human buddy Ryan (Elijah Wood) totally. But the depth of Ryan’s feelings for Jenna come as news as much to us as to him. Maybe this is the point – but we’re far enough into the season that it seems like we should have felt this coming a little more strongly by now.

Ryan is hanging out on the beach when beautiful Italian Cinzia (Gabriella Pession) stops by to flirt with him. Wilfred successfully guilts Ryan into leaving and picking up Jenna’s dry cleaning. However, Ryan later decides against waiting for Jenna’s cable guy on her behalf in order to search for Cinzia. He finds her, she wants to come home with him, it’s all good – except for Wilfred freaking out (Jenna’s cable is his cable, too).

Jenna has big news: she’s been hired to anchor the local TV news at noon. Ryan decides to take Cinzia up on her invitation to join him in Italy. Wilfred is furious – until he decides that Ryan has invited him along. Ryan protests that they’ll need Jenna’s permission, but Wilfred is sure she’ll give it. With her new job, she’ll probably have plenty of people to protect her, right? Except Jenna’s first telecast is a disaster, thanks to her eating a piece of marijuana candy that Wilfred meant for Ryan. Jenna gets fired, and Wilfred has an attack of guilt – Jenna does need him, and he failed her. He tries cheering her up by doing “silly doggie” things, but she’s way too blue to pay attention. She wants to sue the station for wrongful termination (she has no idea they’re right about her being on drugs at the time), but she can’t afford a lawyer.

Ryan, of course, used to be a lawyer, before his suicide attempt. Wilfred insists that Jenna needs Ryan as well – he can’t go off and leave while she’s like this. Ryan has a dream in which he’s on trial, with the judge, prosecutor and court stenographer all being Wilfred. Ryan isn’t allowed to defend himself, since he has refused to be a lawyer any more. Does he love Jenna enough to sacrifice for her? Ryan wakes up and regretfully sees Cinzia off in a cab. Even though Jenna doesn’t reciprocate Ryan’s feelings, he and Wilfred will be there for her.

Ryan tends to oblige pretty much anyone who asks him to do anything, and Ryan babysitting Wilfred has from the beginning been about Wilfred rather than doing Jenna a favor. We haven’t seen many major interactions between Ryan and Jenna, certainly nothing to make us suppose until now that Ryan’s sentiments have been upgraded from a crush to self-sacrificing love. It seems like it should have been easy enough to find a few minutes to give actors Wood and Gubelmann a scene that would better illustrate Ryan’s feelings in the matter.

However, “Sacrifice” is very funny as a whole, with the trippy dream sequence a high point. Wilfred as the court stenographer, separated from his other incarnations by slightly shorter ears and typing style that is at once finicky and flailing, is an especially good detail. The banter between Ryan and Cinzia is witty and sweet, and Pession comes across as an agreeably credible person, rather than a walking sex fantasy. Wood and Pession generate appealing romantic chemistry together – perhaps Cinzia can return next season.

“Sacrifice” overall is enjoyable; certainly it’s no sacrifice to watch it