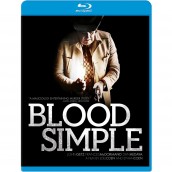 As the Coen Brothers have gained popularity over the years with their surprise hits FARGO, OH BROTHER, WHERE ART THOU, NO COUNTRY FOR OLD MEN and TRUE GRIT, many forget they had humble beginnings in 1984 with their gem of debut BLOOD SIMPLE.

A film noir homage mixed with their familiar dark humor, BLOOD SIMPLE shows the brothers Joel and Ethan Coen already firmly in control of their filmmaking identity. There’s crackling dialogue, extreme, unexpected violence and a labyrinth plot that has a wonderful pay-off during the last few frames.

Now on Blu-ray, the move looks fantastic. Shot by Barry Sonnenfeld (now a director in his own right), the movie is stylized both with its inventive photography but also in its deadpan tone.

The story follows Abby (Frances McDormand), an unhappy cheating wife to Marty (Dan Hedaya). He’s not a very nice bar owner or husband, and he’s hired a private detective (M. Emmet Walsh) to knock of her and her lover Ray (John Getz).

What could have been a familiar story is turned on its head by the Coen’s expert pacing and wonderful knack for out-of-left field surprises. It’s also interesting to see the seeds of NO COUNTRY FOR OLD MEN being planted here. Both films have an unlikely kinship and for those not familiar with BLOOD SIMPLE, it would make a great double feature to watch both films back to back to see how much the brothers have stayed true to themselves for nearly four decades now.

The acting is excellent as is the wonderful Carter Burwell score. It’s simplistic in a 1980s sort of way, but it also gives the film its wonderful backbone too.

This Blu-ray edition comes with special features from the previous 2003 DVD edition including audio commentary by Kenneth Loring of Forever Young Films (it’s a faux commentary), plus the theatrical trailer.

For purists, this is also the Coen Brothers redux cut that they did in 2003. Surprisingly it’s not longer, but rather shorter and it also replaces some key music in certain spots.

Unlike George Lucas tampering with the STAR WARS films, BLOOD SIMPLE isn’t hurt by this tinkering, if anything the film is a bit tighter, though I do miss “I’m a Believer” as one of the early song cues.

BLOOD SIMPLE is a great film, and perhaps one of the least known by later Coen Brothers fans – but it’s still holds up as one of their best. It’s a shocking, unique and enjoyable thriller that still holds on to its charms some thirty years later.