Home » CD Review: RISE OF THE PLANET OF THE APES 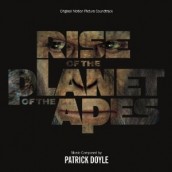 CD Review: RISE OF THE PLANET OF THE APES

Patrick Doyle hails Caesar with one of the best APES scores

For a movie that’s about evolution, it’s fitting that Patrick Doyle, a composer once renowned for the classical orchestral sound of HENRY IV and DEAD AGAIN, would essentially turn himself into a master primate of the new Hollywood action sound- a similar jump up the blockbuster studio ladder that he took earlier this summer with THOR. But as with that thoroughly entertaining film and superhero score, the transfiguration of Doyle’s trademarked sound with pulsing electronic and orchestral rhythms is very much a good, if not pretty great thing, especially for the command and conquer goals of Caesar in RISE OF THE PLANET OF THE APES, a powerful entry in a franchise that’s featured the likes of Jerry Goldsmith, Leonard Rosenman and Danny Elfman.

Nothing’s going to come close to the revolutionary, musical barbarism that Goldsmith applied to the first APES movie. But then, Patrick Doyle’s after the sound of a planet of Homo sapiens, an approach that makes this APES the most “human” score of an impressive bunch. Doyle’s richly thematic approach lets us fully identify with Caesar, packing a real punch of growing anguish, and self-actualization that makes us root for him to take us bipedal scum down.

At first alternating BOURNE-like pulsing for some very stupid scientists with the orchestral emotions of Caesar’s ordeal, Doyle’s anger grows until the musical samples and throttling orchestral rhythms that make up today’s action music hero floods into Caesar, giving him all the presence of The Rock or Vin Diesel as he takes The Man down on, and under Golden Gate Bridge. Yet it’s the sorrowful parting with his human father and trumpeting ape pride that represents the intelligence, and true feeling that elevates this unexpectedly great APES to near the top of the franchise. And while this score may not be the Doyle of old, it’s a thrilling next step for his talents that forgets none of the spirit, or melody that impressed us with him in the first place.

Previous APES composers have applied the expected primate sound to varying levels of belligerence, and RISE is no different, if a bit more subtle as cooing, drum percussion, African singers and tribal rhythms conjure the conflicted nature of a simian hero trapped in a world he never made.

Click on link: To buy the Rise of the Planet of the Apes soundtrack

Tags: Movie Soundtracks, Patrick Doyle, Rise of the Planet of the Apes