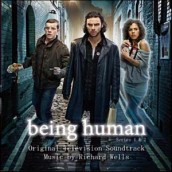 For this horror take on THREE’S COMPANY, a ghost, a vampire and a werewolf try their hand at co-habitation with results that would have made mincemeat out of Mr. Roper in the BBC series BEING HUMAN.

Yet composer Richard Wells (EVIL ALIENS, THE MUTANT CHRONICLES) music goes a long way towards aurally convincing us of BBC’s oddball high concept, taking a straight-laced approach to this series’ growing supernatural friendship in Series 1 & 2, while also giving its ties that bind a particular mournfulness that comes with being undead.

The cues within offer visceral shocks and eerie abstractness, while a lyrical guitar and chorus provide spectral beauty. And while he doesn’t go for the supernatural quirk that Jim Dooley gave an American genre show like PUSHING DAISES, there’s still subtle humor to be had in a woozy horn dance and upbeat rhythms. Veering between the eerily intimate and chilling atmospheres, Richard Wells’ work is intriguingly caught between heaven, hell and the rent check.

Click on link: To buy the Being Human soundtrack