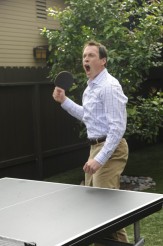 After playing with some strange metaphors for the past few weeks, WILFRED returns to a plot that makes sense, at least within the general craziness of a show about a guy who imagines his neighbor’s dog as a man in a dog suit. “Conscience” is amusing without being a laugh riot – on the other hand, it doesn’t encompass a huge “ick” factor.

Human Ryan (Elijah Wood) and canine Wilfred (Jason Gann) are both seriously bummed that Drew (Chris Klein), boyfriend of Wilfred’s owner Jenna (Fiona Gubelmann), is back in town. Ryan is amazed that, although Wilfred loathes Drew, the dog backs down to the man after being smacked on the nose with a rolled-up newspaper.

Wilfred wants Ryan to kill Drew. Once he gets over his squeamishness about doing anything that might make Jenna unhappy, Ryan decides to break up Jenna and Drew. Knowing that Jenna doesn’t like what a sore loser Drew is, Ryan intends to beat his rival at Ping Pong. Ryan loses the match, but Drew is actually a sore winner as well, and Jenna throws him out. Ryan starts to fret that he’s done the wrong thing, then tries to get Wilfred to listen to him by hitting him with a rolled-up newspaper. Wilfred is so angry that he tries to poison Ryan – with chocolate (which is poisonous to dogs). Ryan saves Wilfred from a dangerous situation, Wilfred is impressed that Ryan did the right thing even knowing that Wilfred tried to kill him, and Jenna finally takes Drew back.

What’s perhaps best about “Conscience” is that it at least is about something that tangentially relates to something that is an issue for people with dogs – what if the dog doesn’t like one’s significant other? WILFRED being WILFRED, it of course puts a very different spin on the matter (now you can worry that your dog is conspiring with your next door neighbor to break up your relationship, instead of just chewing on shoes or growling).

“Conscience” does raise at least one very good question – at one point, Wilfred asks Ryan, “Why do you do everything I tell you to?” If Wilfred as a speaking entity is part of Ryan’s id, that’s the answer, but since it doesn’t seem that WILFRED the show is ever going to examine that dynamic, it remains a matter of interest. As usual, much of the humor here comes from Wood taking Ryan through the journey of distress, astonishment, denial, scheming, action, doubt, self-recrimination and atonement that he seems to undertake often. By now, we know the steps, but Wood makes them highly watchable. Gann has great consistency as Wilfred, but the character has solidified into such a persistent bully that it’s becoming difficult to root for the dynamic between him and Ryan. Gubelmann is sweet and Klein is very game as the volatile Drew.

“Conscience” also brings up another issue that it doesn’t address – Drew is so off-balance, win or lose, that we have some concerns for Jenna’s safety with this guy. Of all the things for Ryan to have a crisis of conscience over, getting Drew to show his true colors to Jenna seems like it shouldn’t be one of them. This is one instance where we tend to side with Wilfred on the general outcome – getting Drew away from Jenna – even though obviously Ryan has a much better grasp of how to accomplish this. It isn’t as though Ryan has set up a false situation or that Drew simply has an unattractive minor bad habit – the guy has rage issues that anyone contemplating cohabitation should know about. Given Drew’s eventual epiphany about his own behavior, it seems like the title may apply to him and Ryan may actually have inadvertently helped him.

This is an interesting episode with a lot of angles, even if it doesn’t explore all of them.