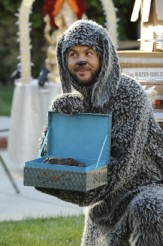 Given how WILFRED as a series sends up everything, almost the last thing one would expect in an episode is a note of sincere emotion, but that’s just how “Anger” ends. On its way, it deals once more with Ryan’s (Elijah Wood) awesome passivity in the face of verbal/emotional abuse, Wilfred’s (Jason Gann) diabolical behavior, some screwy family dynamics and a mash-up parody of both ghostly possession and scary ventriloquist dummy stories.

Wilfred refuses to believe that Ryan’s sister Kristen (Dorian Brown) hates him. The dog also urges Ryan to be far more aggressive with Dorian as she presses him into service as a caterer at a party she’s throwing in the hopes of getting ahead at the office. While excavating the basement, Ryan and Wilfred come across the collar that belonged to Sneakers, the dog Ryan had as a child. Sneakers drowned in the family pool, and Ryan has lived with the guilt of not closing the pool gate for the rest of his life. Wilfred is jealous of Sneakers, puts on the collar and then begins speaking in a high squeaky voice, not unlike an evil dummy on THE TWILIGHT ZONE, as he is apparently possessed by the smaller animal.

Ryan thinks Wilfred is just putting on an act, but Sneakers insists it’s really him – and that Kristen is really the culprit who left the gate open. After Wilfred/Sneakers succeeds in trashing Kristen’s party, Kristen confronts Ryan, Ryan finds the wherewithal to speak up and Kristen confesses to having left the gate open. Wilfred/Sneakers says he wants to say goodbye and Ryan finds himself holding, and hugging, an actual terrier. And then we see Ryan asleep in bed, so perhaps he’s dreaming everything …

Wilfred the character is also surprisingly homophobic, not to mention oddly uncanine, in his horror at hearing that Ryan and Sneakers used to snuggle. Okay, Ryan sees Wilfred as a guy in a dog suit, but doesn’t Wilfred have any doglike characteristics? It is, however, fun to see Gann as Wilfred flipping through personalities as the character gets sequentially possessed by all sorts of spirits. Wood has a lot of integrity in how he plays Ryan, whether he’s deflecting a situation or confronting it, and Nestor Carbonell is amusing as a pompous obstetrician, who prompts one of the funniest lines of the episode from Kristen’s exasperated co-worker.

What’s startling about “Anger,” though, is that after all of its jokes and in the midst of its premise, it does give us that boy-and-his-dog moment. Whether or not this quality resurfaces, for the span of the shot of Wood holding the happy terrier to his face, WILFRED shows real heart.