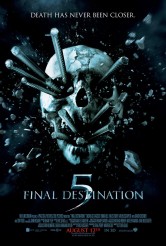 Death (and 3-D) returns for the fifth time around, but the wear and tear of this formula is starting to show

When the first FINAL DESTINATION came out in 2000, it had both the gift of novelty and inventiveness. The notion of people who “cheat” death only to have it make more grabs at them via bizarre accidents was relatively fresh, and the accidents themselves were wonderfully convoluted, as well as very gory. There was also at least a semblance of plot as the remaining characters worked out what was happening, then tried to figure out how to stop it.

However, five films in, the FINAL DESTINATION franchise is starting to look like a supernatural justification completely cutting government budgets for paramedics, firefighters and police. Hey, don’t bother saving those imperiled folks now, they’ll just be dead in a couple of days from something else anyway. FINAL DESTINATION 5 adds a new, “Say what?!!” story element to this iffy subtext by having the coroner (Tony Todd, who appeared in the first two films and now this one) mention that it may be possible to waive Death’s claim by killing someone else and claiming their years.

At the outset, it seems like writer Eric Heisserer (working from FINAL DESTINATION original writer Jeffrey Reddick’s premise) and director Steven Quale are trying to marry their horror to the deadpan humor of THE OFFICE, a la the wonderful 2006 SEVERANCE, by starting FD5 with a weekend office retreat for a paper company. The company bus must cross a suspension bridge that is undergoing repairs, and Sam Lawton (Nicholas D’Agosto) has a horrible vision of the bridge collapsing and almost everybody dying. He gets some of his compatriots off the bus before the vision starts to come true, and in the end, Sam has saved himself and seven others. Unfortunately, the survivors start dying in freak accidents, until the coroner explains to them that Death doesn’t like to be cheated, but there may be a way to get around the long reach of Fate …

It’s hard to know where to start with the film’s problems, but this last bit is as good a place as any. Leaving aside the issue of why the coroner would put that particular piece of advice out there, and why he waited until this movie to mention it, if a narrative thread like that is going to be introduced, it deserves a lot more use than it gets here. There is the potential for suspense and even pathos with the choice this gives the characters (if they buy it at all), but it’s handled in a utilitarian manner. This leads to another issue. The opening on the bridge and the first crazy-chain-of-events fatality are conceived and staged with considerable ingenuity and detail. Then the deaths get simpler and simpler – at one point, we’re told five different systems had to fail to create the incident, and this information seems more surprising than the accident itself. The finale dovetails very cleverly into the overall mythos, but what comes between the start and the finish seems fairly rote, for all the accompanying bloodshed and viscera.

It makes sense that something like FINAL DESTINATION 5 should be more concerned with its kills than with its characters, but for the most part, they are remarkably bland even for the genre. The most interesting one of the lot is perhaps the Federal agent looking into the accident – Courtney B. Vance plays him with a combination of suspicion, sympathy and disbelief that make the guy entertaining to watch. Otherwise, the supposedly irritating characters aren’t awful enough to warrant the kind of deaths they receive, and the good-hearted people are borderline generic, so that we have a hard time rooting for or against any of them.

FINAL DESTINATION 5 has its moments, but it could have been a better movie without being more expensive to make.