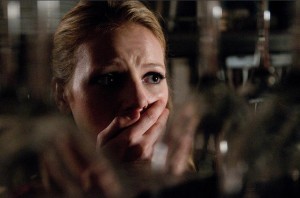 Death is nowhere to be seen on the set of FINAL DESTINATION on this chilly December afternoon. In fact, Death is perhaps the cheapest actor working on the long-running franchise, that’s because Death is an unseen force – manipulating the kills in very complex and clever ways, but never showing his (her, its) face.

Of course every actor working on this latest installment (once again filmed in 3-D and hitting theaters nationwide tomorrow) is excited by what kind of horribly, gruesome ways Death has engineered for them to die on screen.

For Emma Bell and Nicholas D’Agosto, they reveal that they are the anchors of the film, so to speak. D’Agosto plays Sam Lawton, the unfortunate person who has the vision that the suspension bridge is going to collapse during the opening moments of the film, while Bell plays his love interest Molly Harper.

“It’s a real treat to be in the franchise and be able to have the vision,” reveals D’Agosto. “It’s sort of strange when you get to this point in filming and you’ve seen so many people die and you’re wondering, like, ‘how many reactions will look the same as the other reactions?’” 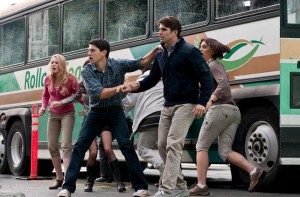 Both Sam and Molly work at the same paper factory in the film and a company retreat is what sets all of Death’s handiwork into motion.

“[Molly] is really a girly girl and she works at this paper factory and she is desperately in love with his character but they sort of have different ideas about what they want to do in life and she doesn’t ever want to get in his way of what he wants to accomplish,” says Bell. “So at the start of the movie she’s sort of struggling with that, but then the series of terrifying events that happen to them, they have to sort of re-evaluate life and their relationship together and how much they actually mean to each other.”

D’Agosto adds that his character’s own ambitions is to become a chef and to travel, but this tragedy brings the two of them closer together.

“My desire is to reconnect to her, [and] the tragic elements of FINAL DESTINATION unfold and that sort of takes over the entire storyline,” adds D’Agosto. “But what’s exciting from my point of view is I get to be the character that sort of has to figure out where this premonition comes from, what does it mean, what’s the process as each of these deaths [as they] unfold. And I know that’s fun for people to talk about who are fans of the franchise, and it’s fun to get to kind of have my own feelings about that as well.”

One of the coolest aspects for both of them is working with the recreated suspension bridge on the Mammoth Studios stages. Draped with green screen and positioned high up on a gimbal controlled-bridge (that moves and sways like the real thing) has definitely been a challenge for these two young actors.

“It’s a terrifying experience, but what’s great about this set is that it’s so lifelike and it has so much action on it with the gimbal and its scope and size,” admits D’Agosto. “So you’re able to kind of transport yourself there. There’s a lot of green screen but you also have a lot of hard objects, a lot of tangible objects to work off. So it’s nice.”

At one point, Bell was even asked to walk across the high beams while the gimbal was moving – without a harness!

“We did a take without the harness because the harness was getting in the way and it was very terrifying,” Bell reveals. “It wasn’t a lot of acting, it was just reacting. And the gimbal that you stand on, it moves a lot.”

And of course, D’Agosto reveals there’s on added twist to this new film which he feels will make it stand out over the others.

“There is a twist,” says D’Agosto. “Every one of them has their own twist for this particular [world], but this one has I think an even more extraordinary twist within the world in the sense that there’s something that happens that makes the characters relate to each other in a different way. So that has allowed the narrative to change in a way. I can’t really talk about it, but it’s a fun twist and it’s good for all of us ‘cause it adds a dramatic element that you’re playing off with the people around you instead of just this inanimate fate.”

And even though Death doesn’t get top-billing, the two actors reveal Death’s presence was felt every step of the way of production. In fact, during a dinner with the filmmakers, cast and studio executives before production began, Death couldn’t resist making its presence felt.

“The studio comes up and the producers all take everyone out to dinner and everyone kind of gets to know each other and then they all go back home,” says D’Agosto. “But one of the studio execs, he had his back to a wine rack and just – I can’t imagine how it happened exactly, but one of the bottles from the very top rack fell off and exploded right behind him on the ground.”

With red wine flowing underneath the seat, Bell observes that “it was very FINAL DESTINATION.”

“Everybody was just, like, ‘this is the christening of this film – our studio exec almost just died, and blood appears to be, like, filling up the table that we’re all sitting at,’” adds D’Agosto.

“It was pretty creepy,” concludes Bell.

Yes, just like a FINAL DESTINATION movie should be.