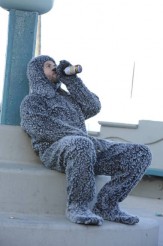 An episode that makes satisfying sense, in a WILFRED sort of way 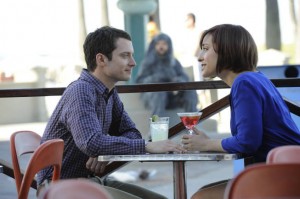 With two episodes in a row that end up with Wilfred (Jason Gann) having unambiguously helped Ryan (Elijah Wood), “Dignity” seems to be part of a WILFRED Season 2 trend. It will be interesting to hear whether the WILFRED creative team has decided on this as a way to go with the series or if it’s just how the second season has opened, but either way, it’s refreshing. Fans of the total anarchy of Season 1 may be disappointed, but for those who like their craziness tempered with just a touch of through-line, it’s sort of a relief, as it makes the central premise – that Ryan continually allows Wilfred into his life – reasonable, instead of simply one more of the show’s many questions.

In “Dignity,” Ryan has settled into his job as a lawyer at a pharmaceutical firm. He is wrestling with whether or not to attend a black tie event thrown by his father, who had made Ryan feel like a failure for his entire life. Boss Jeremy (Steven Weber) keeps piling work with impossible deadlines into Ryan. However, when Wilfred forces Ryan to bring him to work, the dog turns out to be a hit at the office – especially with Jeremy. Ryan gets to take a lunch break with the romantically interested Amanda (Allison Mack), but the next day, nobody except Jeremy is interested in Wilfred, which makes Wilfred desperate to come up with new schtick to get attention.

Wilfred finally comes up with a routine (running around with a bag over his head) that is inadvertently ruined by the mentally challenged office janitor Kevin (Rob Riggle). When Kevin attempts to pet Wilfred, the dog bites him in the face. Ryan begs Kevin not to tell anyone what happened, and Kevin agrees – if Ryan will clean the toilets for him. Ryan feels he has no choice but to agree.

Jeremy’s work demands threaten to once again derail Ryan’s long-postponed first date with Amanda. Wilfred demands that Ryan stand up to Jeremy. Ryan goes in to Jeremy, who is sitting at his desk – when Ryan tells Jeremy he wants the weekend to finish the report, Jeremy is uncharacteristically mellow about it. When Ryan goes back into Jeremy’s office, he discovers why Jeremy is being so obliging and nonchalant – Kevin is under the desk, servicing the boss in ways surely not covered in the HR job description. Ryan asks for the week off and Jeremy easily agrees. Ryan also finds the courage to decline his father’s party invitation. It then just remains for Ryan to persuade Wilfred the Earth is not flat

There is maybe a little too much of Wilfred unreservedly congratulating Ryan on standing up for himself – it’s enough that Wilfred’s actions add up to some sort of purpose, nobody needs to overdo it – but it is a nice change to see everyone more or less getting what they want.

There is just a hint of suspense in Amanda’s reaction to Wilfred, as she seems to be holding her tongue about something and looks at him oddly. Stay tuned. Mack is great fun as the brainy love interest and Weber is smarmy perfection as Jeremy. He gets bonus points for rolling around on the floor with Wilfred like a man playing with a dog, rather than an actor wrestling fellow actor Gann in a dog suit.

For once, the episode title isn’t ironic. Ryan actually does achieve some dignity here and it doesn’t ruin the interactions with Wilfred. There is even a nice bit where Ryan seems to listen to Bear. Bonus – we find out Bear’s gender (listen carefully and you’ll hear Wilfred use an identifying pronoun).

If WILFRED is actually turning a new leaf in terms of cohesive behavior, it’s a welcome one. If not, the phenomenon is fun while it lasts.