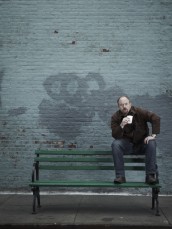 The second episode of the third season of LOUIE once again proves why the show is so brilliant and dry, weird and strangely honest.

“Telling Jokes / Set Up” begins with Louie sitting around the table with his kids (his TV kids that is) and seeing how his young girls have their own ability to tell silly jokes that are quite funny in their own way. Then, the episode jumps to his stand-up discussing his kids in a lovingly affectionate way. That’s the “Telling Jokes” part of the title.

Then, the episode jumps to the totally unrelated “Set Up” portion of the show as a comedian friend of Louie says his wife wanted to ask him over for dinner (Louie thought she never liked him). Once there, he realizes what this is about – it’s a set-up date. The woman (Melissa Leo) is a little rough around the edges – and looks like a total unnatural fit for Louie, but they sort of hit it off, take off in her truck and the episode digresses into a middle-aged make-out session that is as disturbing as it is funny.

Again, what makes LOUIE so great is it’s ability to tell small, simple stories that take widely bizarre turns – all complemented by Louie’s ability to play it  dead pan. He’s the straight man to everyone else, yet his reactions and his decisions are always unpredictable and too real for comfort.

I wonder how long it will take for the rest of the world to realize how special LOUIE is. It’s one of FX’s best comedies and something to look forward to every week, because you’re unsure what you’re going to get next. And as “Telling Jokes / Set Up” proves, even little unrelated vignettes paints a brilliant picture of why Louie C.K. is one of the hardest (and most talented) comedians working today.