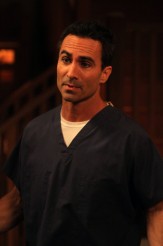 A slightly over-compensating balance of outrageousness and momentary enlightenment 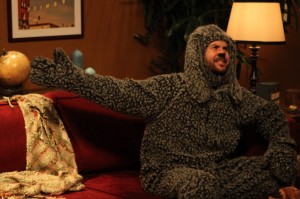 WILFRED often goes to extremes, and so it is with “Guilt,” an episode that on the one hand has Wilfred (Jason Gann) saying and doing even more provocative things than usual, and on the other has Ryan (Elijah Wood) and his sister Kristen (Dorian Brown) reaching epiphanies about their own behavior. Maybe guilt refers to excess on one side or the other of this equation, as at times “Guilt” verges on the preachy, as if compensating for Wilfred, or perhaps Wilfred’s excesses here are to make up for Kristen’s abrupt acceptance of responsibility.

At the end of last season, Ryan blackmailed Kristen – for her urine, no less – in order to save Jenna’s job. (Unbeknownst to Jenna, she wouldn’t have been able to pass the company drug test.) To get out from Ryan’s hold over her, Kristen ended her marriage and took off for India with her medical colleague Arturo (Nestor Carbonell). Now Kristen is back from India, cooing about Arturo and six months pregnant by him.

Ryan feels guilty about almost destroying Kristen’s life. Wilfred tells Ryan that dogs only feel guilty about things for about five seconds and that Ryan should learn from this. However, Ryan invites his sister to stay, and Kristen promptly takes over the house. This is nothing compared to Wilfred’s reaction to her presence. Upon seeing that Kristen is pregnant, Wilfred tells Ryan of the longstanding, secret war between babies and dogs over who is cutest. Wilfred then does his best to cause Kristen to miscarry, causing Ryan to take various steps to keep Wilfred contained.

Ryan finally realizes that Kristen largely got herself into her own mess. Kristen is tearful that her problems are of her own making – after all, she did decide to have an affair outside her marriage, go to India, return to L.A., etc. – and stops blaming Ryan, accepting her own guilt. Ryan is at last able to persuade Wilfred that perhaps babies aren’t so bad after all, although Wilfred “hears” the unborn child (the same way he “hears” bear) teasing him.

Having Wilfred decide to try to kill a baby is icky for meta reasons – expectant parents of the world who watch WILFRED, you do not, repeat not, need to get rid of your canine companions because of the actions of this wacky TV quasi-canine. This aside, the creative team takes pains to have Wilfred’s efforts be as Wilfred-logical as possible, which is to say useless. For example, Wilfred threats Kristen’s belly with a vacuum cleaner extension – scary to a dog, but harmless. Even so, we get a sense of nervousness here, because Kristen’s mea culpa is much more comprehensive than what WILFRED usually allots to its supporting characters (or, indeed, the main characters).

This leaves us feeling like “Guilt” goes a little too far in both directions. Most people may find it hard to appreciate the inherent humor in Wilfred’s sustained efforts, no matter how absurd, to induce a miscarriage, and the Very Special Episode nature of Kirsten’s eventual self-honesty seems like the writers are trying a little too hard to show that someone here has learned a lesson.