The actor/writer talks coming back from last season's cliffhanger, plus Bear 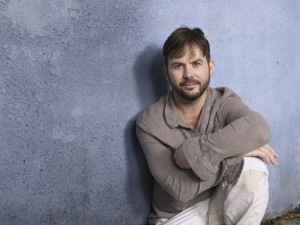 There are plenty of other TV series with characters who are former lawyers, but FX’s WILFRED is the only one where the lead, Ryan (played by Elijah Wood), sees his neighbor’s dog Wilfred, played by Jason Gann, as a man in a dog suit. Not only that, but Wilfred keeps urging Ryan to do some questionable things – and then Wilfred generally urges Ryan to undo whatever it was before calamity strikes.

There origins of WILFRED are almost as uncommon as its premise. It started as a half-hour short film written by Gann and Adam Zwar (with Gann as Wilfred and Zwar as the guy who sees him as a man) in 2002 in their native Australia. In 2007, Gann and Zwar expanded WILFRED into a sixteen-episode series on Australian television.

Last year, FX debuted its American version of WILFRED, with Gann reprising a new version of the character, as well as writing on the series, which is executive-produced by show runner David Zuckerman. The U.S.-ified incarnation turned out to be a ratings hit for FX, which renewed WILFRED for a second season while its first was still running.

To return from the happily surprising to the simply bizarre, there is, well, most of what happens on WILFRED. Wilfred, who is in love with his owner Jenna (Fiona Gubelmann), can’t decide if he wants Ryan to woo her in order to get Jenna away from her boyfriend (Chris Klein) or if he just wants to thwart everyone. Wilfred is also sexually attracted to stuffed animals and is in a long-standing relationship with a giant teddy bear he calls “Bear” and insists is alive, but he’s cheated on Bear with a toy giraffe called Raffi, who is evidently into S&M.

There are also Ryan’s hallucinations and dreams, which have involved Wilfred taking on every role in a courtroom, and Ryan’s mother, played by guest star Mary Steenburgen, who turns out to have a point of view similar to that of her son – i.e., Mom’s cat Mittens is played briefly by Rhea Perlman. Then there’s Wilfred’s obsession with marijuana, which led to Jenna accidentally getting stoned. 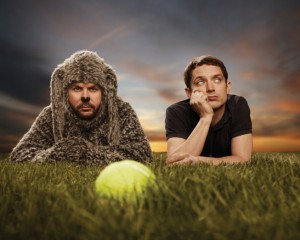 The ensuing chaos cost Jenna her job. Ryan, in a desperate effort to save Jenna, blackmailed his sister Kristin (Dorian Brown) to get her urine so that Jenna could pass a drug test in order to be re-employed. The drug test is passed with flying colors – except that it shows its donor is pregnant. Jenna, believing she is with child, decides she must marry her boyfriend and return with him and Wilfred to theMidwest, while Kristin, not knowing she’s expecting, leaves her husband and stops speaking to Ryan. And so the first season endes

With Wilfred and Ryan in danger of being separated forever, and all of the characters in frantic turmoil, just what is WILFRED going to do so that it can keep going? Gann addresses this and other topics in this exclusive interview.

ASSIGNMENT X: When you and David Zuckerman wrote everybody up a tree, so to speak, did you already know how you were going to get them back down, or did you think, “We’ll worry about that when we come back to the writers’ room”?

JASON GANN: Yes, that’s exactly what happens. That’s what happened with the pilot as well, with the wallet [when Wilfred intentionally left Ryan’s wallet behind at the scene of an act of aggression perpetrated on a neighbor]. That took a lot of time to work out what we were going to do with that, how we were going to make that work. Especially in America, really, you’ve got to make the best show you can and you can’t solve every problem in advance. You never know if you’re coming back again for Season Two, so it’s kind of like you don’t save your good jokes or good stories for the next season, because you don’t know if you’re going to be back, so you just pile everything in and make it the best you can. And then you turn up next year and scratch your head and say, “How are we going to solve that?” But thankfully, David had some really good ideas about where we could take it from the finale. He’d spent a bit of time over the summer holidays working on that, so he came back with some strong ideas, and I didn’t give myself a headache over it, because I needed a break and it was kind of like the well gets dry at the end of every series, so you need to step back and let it replenish. It seemed to work. 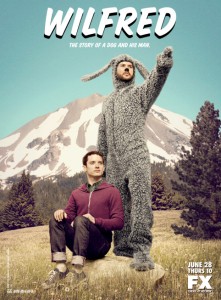 AX: Were you thinking about it during your downtime or by the time you had a break, were you just thinking, “I need a break, now”?

GANN: I really was “Break, now,” because this year, I’m taking it a little bit easier on myself, because we’ve got such a strong team, and it’s an even stronger writers team now. I was working some crazy hours in that writers room and then literally went from one day I was in the writers room and the next day I was on set, and then the hours just got even crazier on set, so by the end of shooting, I was exhausted in every way, so I’ve got to say that in that break, beyond doing interviews and talking to fans and stuff, I didn’t think about it until I came back.

AX: Where are the writers at right now with second season?

GANN: We’ve still got the last four episodes to break. We have a rough idea of how the season’s going to end.

GANN: Well, he’s no more crazy than the dude on MR. ED. It’s a tough one, because [the association between Ryan and Wilfred] a lot harder kind of relationship [than the one on MR. ED], and once you’re in there making it, you tend to just accept it. “This is a really healthy thing, this guy has a healthy relationship with his cool magic friend!” But then when we go into the reality of what’s going on, it’s like, “This guy is severely schizophrenic.” We don’t ever think too much about what it would really mean, this relationship. I think that we’ve really just started to touch on it, I think. I think there are a lot more opportunities for where we could take it.

AX: Will we be seeing more of Bear?

GANN: I don’t know. I don’t think Raffi’s going to be back yet, but Bear is a character that we’ve gone into, but recently he came up in a pitch and I was like, “Hmm, we’ve got to be careful there.” You can tend to feel it when it’s getting too much, so you don’t want everyone to get sick of Bear. It’s a good relationship and we’ll see more of him. Or her.

AX: Might we ever see Bear the way Wilfred seems to see Bear, that is, as a character played by an actor?

GANN: We’ve talked about it. It’s a really fun idea. If we do it, it would have to be delicate and subtle, like Rhea Perlman as Mittens.

AX: On the flip side of the Bear issue, if Bear is ever shown as a person, might there be problems, since Wilfred treats Bear pretty badly?

GANN: Yeah. I would not like to know what Bear says if he ever gets to speak. It’s probably just as well if he doesn’t speak [laughs].

AX: At this point, Bear seems like Wilfred’s delusion …

GANN: I think that’s a – Wilfred and anything. The couch.

AX: Do you have a favorite episode from the first season?

GANN: I’m really fond of the hospice one and I really liked doggy day care with Ed Helms and I liked the second one, too, with the laser pointer. The laser pointer is fun for me, because Wilfred’s story isn’t as strong as in some of the other episodes. I do some of my funniest physical comedy in there, the laser pointer and the pole-dancing. I try and get into every episode a fair bit of physical comedy, and the Raffi stuff, the sex scene with Raffi, is one of my favorite things as well.

AX: In “Anger,” the episode where we met Ryan’s old dog Sneakers, who possesses Wilfred for a time, we see Ryan holding Sneakers as a real dog at the end. Was that meant to be a really emotional moment? It turned out that way.

GANN: Yeah. It was more emotional than I think that we intended it to be, but we don’t want to shy away from that. We thought those moments really worked, and audiences really responded well to it. We don’t try and contrive those emotional beats, but if they start to happen, then yeah, we’ll go with it. We earned it, you know what I mean? You’ve got to earn those moments and I think the show is funny enough, and if people care about the characters, then [they work].

GANN: I’ve got a couple things, but I’m not ready to talk about them.

AX: Do you know how many seasons you’d like to see WILFRED run?

GANN: Well, we say four or five we’d be really happy with to do justice with the world that we’ve created, but you just don’t know, do you? I think we’ve only just started to tuck into something that [further explores] character. I know it ends when our contract’s up and Elijah doesn’t want to do it any more [laughs]. We then do that thing when Ryan’s little brother comes moving in and it becomes a multi-cam live studio audience.