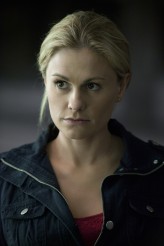 An episode weighted more toward horror than sex or humor lacks the true TRUE BLOOD feel, though there are some wonderful unexpected appearances 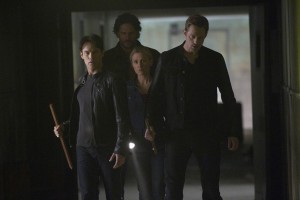 This seems like a strange complaint to level at a show about vampires, werewolves and other things that go bump in the night, but the TRUE BLOOD episode “Let’s Boot and Rally” is so weighted toward horror and angst that the humor gets a little buried this time around. There are some funny moments and the creepiness is good, but a lot of this feels like it is (pardon the expression) vamping while waiting for the real TRUE BLOOD to begin. On the other hand, there are some great guest turns here, some entirely unexpected, that produce some thrills.

After a long off-and-on courtship, Sookie (Anna Paquin) and Alcide (Joe Manganiello) finally get all hot and heavy in her bedroom, with Alcide removing his shirt and declaring he’s waited a long time for this, and Sookie stripping down to her bra – and then, alas, vomiting because she’s had too much to drink. Compounding the discomfort, vampires Bill (Stephen Moyer) and Eric (Alexander Skarsgard) are in the bedroom doorway, clearly not displeased by the situation.

Bill and Eric explain that they need Sookie’s help in finding dangerous ancient vampire Russell Edgington (Denis O’Hare), who has it in for all of them. Alcide is angry at Bill and Eric for not killing Russell when they had the chance (at the end of Season 3). Sookie realizes that there’s no point in trying to make her life normal, because it seems like it never will be.

Alcide’s human employee Doug (Jayden Lund) seems to have been on the scene when Russell escaped his cement prison, but since Doug doesn’t remember a thing about it, Bill and Eric need Sookie to read his hidden memories. Doug and the memories lead the group to what looks like an abandoned hospital, where Russell is holed up. Bill and Eric want Sookie to wait outside and suggest they split up to cover more ground. Sookie (possibly channeling Marty from CABIN IN THE WOODS) points out that a) splitting up is a stupid idea that gets people killed in horror movies and b) since her zapping powers (from her fairy ancestry) seem to be the only thing that have an effect on Russell, she’s the one protecting everybody else.

Inside the building, our heroes find a group of terrified human captives, hung upside-down in straitjackets. Doug freaks out, bolts and is attacked by something we can’t see. Russell, looking much like his old self, is lying on a bed. He’s happy to see Sookie and dares Bill and Eric to take their best shot. Alcide is by the doorway – something attacks him.

After the visit to the fairy nightclub, Sookie’s brother Jason (Ryan Kwanten) winds up at home, naked, having nightmares about his parents bleeding from their necks (as if from vampire bites). Sheriff Andy (Chris Bauer) winds up naked on his cousin-in-law Arlene’s (Carrie Preston) couch, much to her annoyance. Neither Jason nor Andy can remember how they got there, but Andy decides he wants to be faithful to girlfriend Holly, so he’s not going back to the nightclub and says Jason shouldn’t either.

Andy and Jason respond to Sam’s (Sam Trammell) call and show up to investigate the murders of Sam’s two shapeshifter friends. Andy doesn’t bat an eye when Sam mentions that he’s a shapeshifter as well. When Sam goes to tell his girlfriend Luna (Janina Gavankar) about the deaths of their friends, both are shot on Luna’s lawn by mask-wearing yahoos in a truck. Luna’s little daughter Emma turns into a wolf pup and flees.

At Fangtasia, Pam (Kristen Bauer van Straten) puts her new progeny Tara (Rutina Wesley) on bartending duty. Jessica (Deborah Ann Woll) stops by for a drink, recognizes Tara and some bonding happens, as Jessica is a relatively new vamp herself. It seems like the beginning of a beautiful friendship – until Jessica finds Tara drinking from Jessica’s human ex-boyfriend Hoyt (Jim Parrack) in the restroom. Jessica grabs Tara, Tara throws Jessica off and a fight breaks out.

Lafayette (Nelsan Ellis) is having a miserable time, what with the demon reflection he sees when he looks in the mirror, and the mockery he hears coming from various religious icons.Lafayette stomps the icons and begs for the ghost of his lover Jesus (Kevin Alejandro) to appear to him. Jesus appears – but only his decapitated head, with his mouth sewn shut. In the nursing home, Lafayette’s mother (Alfre Woodard) sees Jesus in the same condition, but she takes it in stride and seems to understand what he’s telling her.

Finally, Terry (Todd Lowe) and Patrick (Scott Foley) are able to escape from their former battle comrade Eller (Brian Geraghty), who insists they were cursed with an evil spirit, an Efreet, when they all participated in a massacre in Iraq. Terry saw the Efreet at the time, but Patrick insists it’s all b.s. Terry reluctantly leaves Eller tied up in Eller’s bunker – where Eller is attacked by the Efreet.

Back at the Authority, Roman (Christopher Meloni) muses on how he cites vampire religious dogma to keep his followers happy, much the same as humans do with their faith. He’s sad about having had to kill one of the authority council in the last episode. Bill and Eric have until dawn to kill Russell, or they will be killed remotely by the mini-stakes harnessed over their hearts.

TRUE BLOOD normally runs on an engine of characters who are exasperated, curious, sexually enthralled and traumatized. “Let’s Boot and Rally,” despite its colloquial title, is heavily weighted toward trauma. Alcide is mightily annoyed but we don’t get to spend much time with him, and Sookie’s anger and distress make sense, but as she points out, by now they’re practically a simple fact of life. It’s unclear why Bill suddenly feels the need to pick a fight with Eric about Eric’s imprisoned sister Nora (Lucy Griffiths) – if this is meant as exposition to remind us that Nora sides with the anti-human Sanguinistas, it’s not necessary here.

The whole business of the Authority agreeing to let Bill and Eric seek Russell but giving them such a short timetable doesn’t bear much scrutiny, though it’s fun to hear Tina Majorino as the Authority’s techie Molly warn the guys in chipper fashion that they had better hurry.

We feel bad for Sam losing Luna (as that looks like the outcome of the shooting tragedy), though this does bring up some intriguing possibilities – is Sam going to get into a custodial battle for Luna’s werewolf daughter? Will Alcide come into this issue? Who are the shotgun-toting bigots and how long can they possibly survive?

As the Efreet takes the form of a smoke monster, a lot of people are going to be reminded of LOST. Since TRUE BLOOD has a few other things in common with the older show – lots of characters, strange story developments – this isn’t all that disconcerting. Indeed, on reflection, it seems like the smoke monster might easily have relocated itself into this story.

The scene where Jessica manages to cheer Tara up is pleasing, as it’s enjoyable to see both the characters and the actresses playing them get to work with each other. However, the interactions between Pam and Tara are so far brief and disappointing – neither of them gets anything especially zingy to say to the other, to the point where both seem uncharacteristically at a loss for snappy comebacks.

It is, of course, a joy to see O’Hare back as Russell. Lying supine on his bed, he exudes happy, limitless menace just by being there. The scene is electric – Paquin, Moyer and Skarsgard allow their characters to be properly intimidated and O’Hare brings it with a deft touch that is marvelous to behold.

We knew Russell would be back at some point, but it’s a startling pleasure to see Alejandro and especially Woodard return. They’re both great in their roles (though they don’t have much to do in this episode) and Lafayette can sure use some backup if Jesus can ever open his mouth again.

Meloni is a lot of fun to watch, and it’s helpful to know how Roman feels about the doctrine he preaches. However, it would be better if we understood exactly what Roman is doing with the group of vampires he meets during the episode, not because we can’t stand the suspense, but because without clarity, the scene is just baffling and a little dull.

“Let’s Boot and Rally” is an episode with a lot of interesting set-up, but only a few scenes here are truly engaging on their own merits.