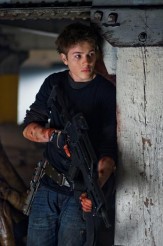 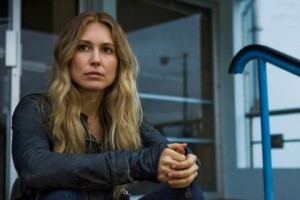 Whereas last season of FALLING SKIES felt like the story meandered a little too much (but it was still pretty good), Season 2 is just one big ass-kicking episode after another.

With “Love and Other Acts of Courage” the 2nd Mass learns more about the Skitters and what their possible plan is after a whole gaggle of visitors are wiped out mysteriously, but not by humans. It was in fact Skitters.. Apparently, the Skitter that tortured, but let Tom (Noah Wyle) go when he was on the spaceship, has been communicating with his son Ben (Connor Jessup).

This Skitter is actually a good one (or is he). His planet was taken over by the overlords and harnessed, but he came to envy the earthlings for fighting for survival in the face of extinction. He makes a proposal for the humans and Skitters to team up and fight the Overlords.

Tom is suspicious, but perhaps there’s some truth to it. Others are  more concerned about Ben since clearly he still has ties to the Skitters, despite being de-harnessed.

Meanwhile, Maggie (Sarah Carter) and Hal (Drew Roy) are having feelings for each other. There’s some nice chemistry going on there as we learn a little more about Maggie’s past.

There’s also some nice moments between Tom and Captain Weaver (Will Patton) who admit to not liking each other at first, but now have immense respect for one another. Weaver also explains to Tom that at some point, he’s going to have to make a tough choice about Ben – for the safety of everyone else. It’s a wonderfully written scene and it’s handled very adeptly by director John Dahl.

Even though the episode has many small moments, there are many strong character moments that moves the show even further along. Plus, the revelation that Skitters want to rebel against the Overlords is HUGE.

Here’s hoping the FALLING SKIES momentum continues. Here’s a show that V should have been, but somehow could never even come close to. And here’s a show that struggled with Season 1, yet has developed into a strong, emotional and exciting series that feels like it’s heading toward something very big.