Home » TV: FALLING SKIES review – Season 2 – “Shall We Gather at the River” 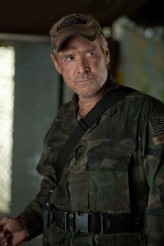 TV: FALLING SKIES review – Season 2 – “Shall We Gather at the River”

It hasn’t been a very good few days for Tom Mason (Noah Wyle) in the first two episodes of FALLING SKIES.

So far he’s been:

Yet, he keeps on ticking.

There are two things going on in “Shall We Gather at the River.” The first is the resistance looking for a way to get them out of a corner as the aliens approach from either side in an attempt to eliminate them once and for all. The only problem is there easiest way gets shot all to hell when an alien craft breaks apart and cripples the bridge they were going to use. The second is Tom’s uneasiness about what the aliens may have done to him during his time in captivity and how he might be a danger to the group. He even goes as far as to ask his son to kill him if he seems like he is going to do something to harm someone.

Tom has reason to be afraid too. They just let him go. In the opening episodes of Season Two, they killed everyone around him but walked away when it was just him left. That’s a bit fishy. The second troubling bit of news was what was lurking inside of Tom’s eye – a possible living tracking device that the other aliens have been using to find the rest of the group.

The scene where they discover and, ahem, remove the alien from Tom’s eye is quite brutal even for cable network standards and had me cringing the whole way in pain just from witnessing it. As I stated in my previous review, I didn’t watch any of the first season of the show so I’m not sure if they had such brutal moments in Season One, but this type of TV could have me watching more, as I love stuff that’s hard to stomach.

Tom is also continuing to try and readjust to his family’s new place in the resistance. All three of his boys are now in some way taking up arms against the aliens. That makes sense actually as in a time like this (and has been proven by history) if you can hold a gun and fight, you do. Is Tom now cured of his alien parasites? Or did they do something else to him? I guess we will have to see and see if his own discomfort with being back in the group grows or goes away.

That’s one of the very cool things I have experienced with this show, realism – well, as much as can be. A desperate situation where the hunted humans are doing all they can to fight a seemingly impossible foe. And unlike a show such as the V remake where there were 3 or 4 resistance members, this is handfuls of people all with the same cause – again something you’d think would really happen if survivors made it.