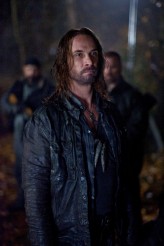 As Admiral Akbar sowed the seeds of pop culture in STAR WARS: EPISODE VI – RETURN OF THE JEDI, I couldn’t help thinking “It’s a trap!” when the pilot just happened to find 2nd Mass and inform them about the sanctuary city of Charleston.

Now, it could all be true and they are preparing viewers for what would be a larger, more intense fight against the aliens in FALLING SKIES, but it just seemed a bit too easy. However, Weaver (Will Patton) did look at her papers and he deemed it legitimate enough to take a chance to go there – and his assertion that his troops have been rapidly dwindling in number isn’t a bad reason either.

More than likely, the payoff to whether there is a government established and a more formidable resistance set up will happen in future episodes as the group makes its way down south.

Let’s just get this out of the way now. Isn’t it possible to present Moon Bloodgood in a more pleasing way? If you watched TERMINATOR: SALVATION she was covered in dirt and blood and all sorts of other stuff the entire time yet managed to still look smoking hot. In FALLING SKIES, every episode it looks like she’s about ready to die from dysentery. At least make her look good with the dirt in a show that desperately needs the eye candy to look like eye candy.

Speaking of Bloodgood, there were some pretty major plot points set up for future episodes as well in “Compass.” The developing relationship between Anne (Bloodgood) and Tom Mason (Noah Wyle) as they shared a kiss will be something to watch to see if it goes further given their desperate situation. Now, as I have said in previous reviews I did not watch the first season of the show, so if this happened in previous episodes forgive me.

Also, the ouster of Pope (Colin Cunnningham) from the group (and most of his crew remaining) was an interesting development as it will probably come back to haunt them at some point, or at least Tom (who kicked his ass in this episode) as they have been at odds for some time.

Finally, the alien confrontation with Ben (Connor Jessup) probably has everyone thinking that there is still some connection to the aliens that Ben has that they are waiting to unleash on the resistance – otherwise wouldn’t have the alien just killed him and be done with it? Again, probably something for future episodes to explore.

The center of “Compass” was the death of Jimmy, a little kid that was recruited into the 2nd Mass, whose death was felt across the entire group, especially with Ben, who sent him to his death. The death of little Jimmy showed that they are willing to take the whole recruitment of children into the fight seriously as part of the overall mythology of the show. If you are going to have children fighting and taking on mean nasties, they should be dying just like anyone else doing it and that’s a refreshing change from some shows that wouldn’t have the balls to kill off any kid.