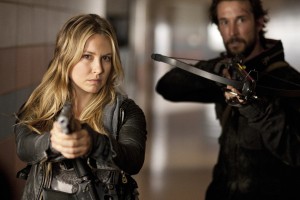 In another major mis-step for the promising series FALLING SKIES, “Silent Kill” once again relies on the series standard formula of a bunch of world-weary dialogue at the beginning of the episode (usually about surviving), a dangerous mission, and a coda that offers hope.

Of course, this formula, five episodes in, is wearing considerably thin.

It also doesn’t help that when major events happen in the story, they’re not played for any sense of tension or suspense, but rather out of convenience.

For example, Dr. Harris (guest star Steven Weber) was such a douche last episode to the alien captive, that he was just begging to be killed by that Skitter. Of course, his comeuppance occurs in the first few minutes of this episode as the Skitter kills him (off camera, mind you) feeling almost an episode too late. Why bring Weber back for a minute and kill him? Bad planning!

This was a totally useless kill. It also doesn’t even feel shocking, it just feels out-of-place and a kill of convenience (“Oh, something has to happen – let’s kill the doctor now”).

“Silent Kill” is primarily about Tom Mason (Noah Wyle) finally rescuing his middle son Ben (Connor Jessup) who had been harnessed by the aliens. He’s been trying to get his son for several weeks now, and now they have a plan which includes oldest son Hal (Drew Roy) entering a hospital with one of the dead Harnesses on his back.

The mission is successful, the harness is taken off of Ben’s back, and unlike the kid last week who has no memory of his previous life, Ben recognizes his dad.

Sadly, this huge emotional moment plays rather soft. We’ve been waiting for this most of the season, yet, like the death of Dr. Harris, it feels like it came just a little too late.

There are a bunch of other side stories happening this episode, which is loosely hung around the theme of motherhood. There’s the pregnant woman (who I don’t remember ever seeing until this episode) who has a baby shower, and Dr. Anne Glass (Moon Bloodgood) reveals that her daughter and family probably didn’t survive the alien attack (she won’t put a picture of daughter on the “missing” board, because she doesn’t have a picture, DAMMIT!).

Then there’s the strange mother-hen like attitude of the Skitters with the Harness kids at the hospital – which brings up a whole other potential question of what the Skitters are up to with our human kids.

Margaret (Sarah Carter) also reveals a bit about herself (she had cancer when she was 16) and somehow, she knows where all the drug dealers are in town. Her character is interesting, and a potential new love interest for Hal, but I think we’re still only scratching the surface of this.

Perhaps the most emotional part of the entire episode, is the one that is the most unstated. Captain Weaver (Will Patton) has a very emotional reaction to the song “Many Rivers to Cross” by Jimmy Cliff and wants it turned off. It’s a very powerful song, that brings some needed emotional weight to the series – and it’s a reminder that even though Tom found his kid, Weaver has no idea where his kid is out there.

Kudos for the show showing, not telling an emotional arc in this somewhat convoluted storyline.

So far, the major problems with FALLING SKIES is coming from its very basic (and now utterly boring) story telling template. There’s no sense the story is going anywhere and no sense that it will build to something significant by season’s end (though I’m confidence the writers have SOMETHING in store, right?).

Wyle is also getting lost in the mix – his story and character is given the same beats every episode without any variation. That’s why the moment when he’s reunited with his son just doesn’t have the gravity and weight that it should have. This should have been MAJOR, but it feels almost too casual.

It’s a shame FALLING SKIES has gotten so lazy with its storytelling, so soon in. I was totally into the first three episodes, and now, I’m not sure what to think. The series is grasping at straws and desperately trying to find out what it is, what it wants to be and how best to exploit its obvious limited budget. And with Steven Spielberg involved as an executive producer, you somehow expect a little weightier storytelling, instead of standard TV conventions.

Here’s hoping the series snaps out of its malaise soon – because I’m not sure I can stand one more predictable episodes like this. If there is any “Silent Kill” here, it’s what the show is doing to the patience of its loyal audience.