An episode that moves all the subplots forward, but is bigger on character grace notes than “did you see that” moments 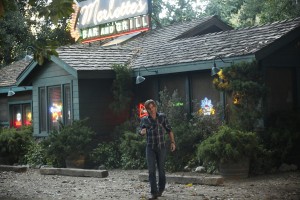 The craziness of the previous TRUE BLOOD episode unrolls consequences in “If You Love Me, Why Am I Dyin’.” This is a particularly appropriate question for Jason (Ryan Kwanten), who has been mauled and is being held prisoner by his werepanther girlfriend Crystal (Lindsay Pulsipher) and her kinfolk, who hope that Jason will become a werepanther himself and father a hardy new generation of the breed.

Eric (Alexander Skarsgard) has lost his memory, thanks to the witch coven’s spell. When Sookie (Anna Paquin) realizes that Eric isn’t faking his bewilderment, she invites him home and lets him stay in the well-furnished vampire cubby hole he had installed when he bought the house during Sookie’s absence. Eric’s second-in-command Pam (Kristin Bauer Von Straten) goes to Sookie’s house and begs Sookie to keep Eric safe while Eric is under the enchantment. Pam especially cautions Sookie against telling Bill (Stephen Moyer), now king of the Louisiana vampires, as Pam is sure Bill sent Eric to the coven knowing what would happen.

It’s unclear whether Bill intentionally set Eric up or not (both vampires were worried by the prospect of living witches with power over the dead), as he is now trying to phone Eric. When Bill’s human realtor Portia (Courtney Ford) comes on to him, Bill says he cannot love her, but when she’s still open to sex, he goes for it. Bill has a young vamp executed for the crime of being caught on camera while feeding on a human – a capital offense now that Russell Edgington has scared the spines out of the human population.

However, Bill is genuinely paternally happy to see the one vamp he’s made, Jessica (Deborah Ann Woll), when she comes to him for advice about how to handle her human lover Hoyt (Jim Parrack). Jessica tries to follow Bill’s counsel, but Hoyt is so angry and hurt when Jessica tells him that she fed on another man (though without sex) that she glamours Hoyt into forgetting the discussion. The couple also find a creepy baby doll that both have individually thrown out – Jessica winds up giving it to workmate Arlene (Carrie Preston), whose possibly evil baby loves the toy. 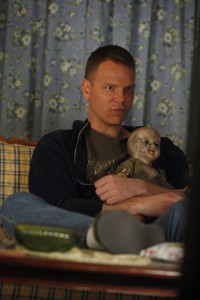 Tara (Rutina Wesley), her cousin Lafayette (Nelsan Ellis) and his lover Jesus (Kevin Alejandro) were all part of the witches’ circle. As none of them know Eric is holed up at Sookie’s with amnesia, Lafayette wants to beg Eric for mercy, as he’s has firsthand experience of the vampire’s wrath before.  The upshot is that the trio succeed in infuriating Pam, who threatens to kill all of them if they don’t produce coven leader Marnie (Fiona Shaw), who is the only one likely to be able to reverse the spell. Marnie, on her own, enthusiastically summons the spirit that allowed her to send Eric reeling into the night.

Sookie visits her werewolf friend Alcide Herveux (Joe Manganiello), who definitely wants to see her – though he has gotten back together with his now clean, sober and repentant werewolf girlfriend Debbie (Brit Morgan). When Sookie’s fairy godmother Claudine (Lara Pulver) shows up at Sookie’s doorstep, demanding that Sookie return to fairyland with her, Eric instinctively attacks and drains Claudine, killing her.

This is a lot of plot to move in fifty-five minutes, but TRUE BLOOD series creator Alan Ball scripted the episode, it all makes sense and moves fluidly. However, the moments that stand out here are the quiet reunions. The scene with Bill and Jessica is surprisingly affecting and effective, as we get a sense of how starved for simple friendship both characters are.

Likewise, although there’s an element of flirtation, the sequence with Tara and Sam hanging out in front of Merlotte’s has a sense of depth and time that most shows – even ones with far less ground to cover – would feel a need to rush past. Instead, we get to explore how these people enjoy one another. A segment with Tara, Lafayette and Jesus (albeit this one has more narrative urgency) has a similarly warm vibe and Paquin and Manganiello demonstrate potent chemistry together.

On the character evolution front, Skarsgard is pretty amazing as the memory-deprived Eric – the actor turns the character inside out, making him courteous, tentative, curious, even innocent. Moyer on the other hand plays Bill’s newly burgeoning badasshood with enthusiasm. Shaw, a phenomenal actress, gives Marnie a sense of wide-eyed wonder even as she conjures up what is likely to be the coming of something wicked.

On the downside, while Kwanten and Pulsipher play their roles with absolute conviction, a little of Jason lying tied up and being sexually abused by Crystal et al goes a long way.

Otherwise, “If You Love Me, Why Am I Dyin’” is a fine episode of TRUE BLOOD that, as usual, leaves us thirsting to know what comes next.

Article Source: Assignment X
Article: Review – TRUE BLOOD – Season 4 – “If You Love Me, Why Am I Dyin’”