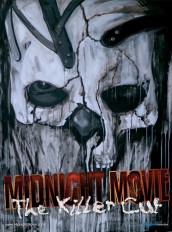 It would be easy from the title to mistake MIDNIGHT MOVIE: THE KILLER CUT for a sequel to the original 2008 MIDNIGHT MOVIE. It is instead a director’s cut of the film, with a new commentary track from director/co-writer Jack Messitt and some enlivening extras, including a good behind the scenes look at the film’s copious makeup effects. Unless one has seen the first cut very recently and/or many times, it’s necessary to listen to Messitt’s commentary to know what the changes are, let alone why they were made.

2008’s MIDNIGHT MOVIE belongs to a small, trippy subgenre of films about films that literally come to life for their audiences. On the upbeat fantasy side, there is, for example, Woody Allen’s PURPLE ROSE OF CAIRO and on the horror side, there are (among others) ANGUISH and Lamberto Bava’s DEMONS, along with John Carpenter’s MASTERS OF HORROR episode “Cigarette Burns.”

MIDNIGHT MOVIE starts out with a great premise. A horror auteur (Arthur Roberts) who has been institutionalized performs a ritual that lets him into his own movie THE DARK BENEATH as it is screened for him, 35 years after its making. This incident leaves a massacre behind and the filmmaker has vanished. The cops are baffled, but we have a good idea about what has happened. Five years later, the film makes its way to a midnight screening at a commercial theatre and the filmmaker, now a masked killer, rides into the theatre on a wave of fear and begins offing the staff and audience members.

The film-within-the-film resembles the original TEXAS CHAINSAW MASSACRE, while the movie we’re watching combines elements of a general ‘70s masked-menace slasher and A NIGHTMARE ON ELM STREET. The problem is that, despite having it explained to us that the killer is using the audience’s fear to bring himself out of the movie into our world, it all feels pretty arbitrary in terms of when he appears and disappears. This puts MIDNIGHT MOVIE on level footing with any number of supernatural slashers.

However, Messitt’s commentary elevates the MIDNIGHT MOVIE: THE KILLER CUT DVD to a higher level. Even if we don’t agree that he’s achieved his goals all the time, it’s intriguing to have him explain what the movie is doing in terms of its own narrative and genre homage, with story stages that occur in the order of horror movie trends in the world. This is one of the more informative tracks that will be of particular benefit to aspiring filmmakers. Whatever one thinks of MIDNIGHT MOVIE itself, filmmaker Messitt’s observations are well worth hearing.