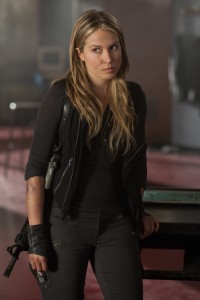 It looks like the first of an actual two-parter has finally jostled FALLING SKIES from its free-fall the last couple of weeks.

After some pretty rote and by-the-numbers storytelling, “Sanctuary Part 1” actually shakes the show up a bit and does some interesting things that lead to a somewhat surprise ending.

The episode gets started with the arrival of Lt. Terry Clayton (Henry Czerny). He is part of the 7th Mass and comes with news that the 2nd Mass (our weekly group of heroes) will be under attack from the aliens very soon.

Clayton has a plan – he wants to lead the children of the 2nd Mass to safety so the military can plan a fight that doesn’t include young casualties.

For Tom Mason (Noah Wyle), who is charge of making decisions for the civilians, he’s a bit hesitant about this plan. He just saved his middle son Ben (Connor Jessup) from being under the alien harnesses, and he doesn’t want to send all of his three sons away even if it does ensure their safety.

Of course, a late night Skitter attack solidifies the deal – and he signs off on all the young kids being sent away with Lt. Clayton so the 2nd Mass can prepare their fight.

Meanwhile, Dr. Anne Glass (Moon Bloodgood) realizes she’s vulnerable when she’s attacked by a family who try to steal all the medical supplies. She never thought he would have to learn to join the fight in a more proper way, and Margaret (Sarah Carter) teaches her some gun play. Thankfully, Anne is moving toward being a more proactive, potentially kick-ass heroine.

I think the most interesting aspect of the last couple of episodes is Captain Weaver (Will Patton). A by-the-books guy, Weaver has to learn to adjust to traditional military tactics vs. dealing with such an unknown threat as the Skitters. That said, Weaver is also mourning the disappearance of his daughters, and his slow bonding with others in the 2nd Mass is one of the nicer transitions. In particular, the scene where he comforts a young, fatherless kid who has become one of the de facto soldiers, is priceless. Some great stuff there, and some nice moments for Patton to play. For such a big, powerful figure, he gets the most internal, quiet and self-reflective moments to play and Patton milks them for all their worth.

There is also some question as to Ben’s recovery – is he still Ben or has he forever been changed by the aliens. I do feel a bit disappointed that Tom didn’t get more alone time with his son now that he finally has him back – but then again, he’s second in command of the military, so getting time to sit back and be dad is not the first order of business for Tom.

The other great thing about “Sanctuary” is some actual alien action for a change. I love the bus shoot-out and the young boy who is danger – it really added some new kind of action to the show.

“Sanctuary Part 1” is a vast improvement from the previous episodes. The show is finding a nice groove, and the pay-off at the end of  this episode really has you clamoring for next week’s episode.

It’s hard to figure out a course of action for a series as ambitious as FALLING SKIES. Do you go big? Do you go small? How do you sustain the storytelling for multiple seasons? The show still has a long way to go to answer those questions properly, but it’s satisfying to finally have an episode that moves the series into a more pro-active direction. The characters are still holed up at the school waiting to be attacked, but at least there’s another threat they didn’t see as a possibility up until now. And that’s what makes for great storytelling. Can’t wait for the fall-out next week.