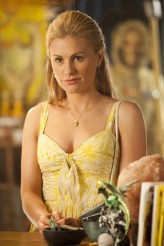 Things improve for Jason, get worse for others and are up in the air for everyone else in this intriguing but disjointed episode 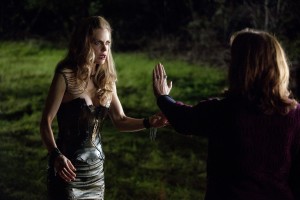 “I’m Alive and on Fire” is the fourth episode of TRUE BLOOD’s Season Four. Individually, the various story threads are engaging, but one-third of the way through this year’s arc, it would be nice to know exactly what we’re supposed to worry about, and it’s still hard to tell.

Sure, we can see various threats popping up here and there, but so far, we can also guess what their remedies might be. There isn’t one big, magnetic menace like Denis O’Hare’s Russell Edgington, much less two, like Michelle Forbes’ sacrifice-happy Marianne and the loony Fellowship of the Sun, to catalyze our fears for the characters.

When Jason (Ryan Kwanten) has unwillingly inseminated most of the female population of were-panther center Hotshot, he is presented with underage virgin Becky. Left alone, the two are mutually appalled, and Becky helps Jason escape. Jason kills were-panther leader Felton, much to the joy of Jason’s erstwhile girlfriend Crystal (Lindsay Pulsipher), who foresees that she’ll now be Hotshot’s “Big Mama Kitty.” She is sure Jason will come back to her, even though he hopes never to see her again. He passes out on the road and is rescued by his friend Hoyt (Jim Parrack) and Hoyt’s vampire girlfriend Jessica (Deborah Ann Woll), who gives Jason some of her blood.

After draining and killing Claudine, the fairy godmother (literally) of Sookie (Anna Paquin), vampire Eric (Alexander Skarsgard) is now not only amnesiac, but also drunk on fairy blood. He runs off into the woods. The next morning, Sookie has to call on werewolf friend Alcide (Joe Manganiello) to shift and sniff out Eric, who is bathing in the lake in daylight. As the fairy blood starts to wear off, Eric starts to burn in the sun and Sookie and Alcide rush him indoors. Eric wants Sookie to stay with him in his cubby hole and is uncharacteristically depressed. Sookie declines to kiss him, though she’s tempted. Alcide goes home to fellow werewolf girlfriend Debbie (Brit Morgan), who smells Sookie but declares she’s not jealous.

Everybody else is looking for Eric. Bill (Stephen Moyer) goes to Eric’s second in command Pam (Kristin Bauer von Straten), who denies knowledge (even though she is aware Eric is with Sookie). Vampire League rep Nan (Jessica Tuck) warns Bill not to harm any humans, including the Wiccans, in his quest. Adding to Bill’s sorrows – it turns out that his new human girlfriend Portia Bellefleur (Courtney Ford) is his direct descendant, which means they have to break up. Bill goes to Sookie and wants to search her house for Eric, but Sookie is indignant, pointing out that she’s never lied to Bill, and Bill relents.

Tara (Rutina Wesley), Lafayette (Nelsan Ellis) and Jesus (Kevin Alejandro) go to coven leader Marnie (Fiona Shaw) to try to get her to reverse the spell on Eric. Marnie has been having visions of a Spanish witch being burned at the stake centuries ago, and it seems the witch’s spirit is guiding her. The quartet start a restoration spell for Eric’s memory, but Pam is contemptuous and interrupts the ritual, which causes Marnie/the spirit to hit Pam with a spell that causes half the vampire’s face to fall off. Pam flees screaming.

While Sam makes time with his new shapeshifter girlfriend and befriends the woman’s little girl, Sam’s brother Tommy (Marshall Allman) goes to see their mother Melinda. Melinda gives Tommy a warm welcome, but it’s a ruse to get him back into the clutches of his no-good father Joe Lee, who wants Tommy to return to pit bull form to fight in the dog ring.

Mellow Terry (Todd Lowe) gets a big shock when his and Arlene’s baby son (biologically the child of late serial killer Rene Lanier) scrawls on the wall in crayon “Not Your Son.”

This is obviously a whole lot of event, but apart from Tommy – who has been such a little jerk that our sympathy is slow to rouse – it’s not clear what we’re meant to worry about in the immediate future. Eric is safe for the time being, Pam is alive but may think twice about attacking the witches again and Marnie’s spirit so far hasn’t done anything more than repel attacks. We suspect Jason is going to become a were-panther, but since all of the other shapeshifter characters seem to have adapted to their natures, it’s more a matter of curiosity than dread to see how he’ll handle it.

The episode has some very good grace notes. Sam’s charming willingness to play Barbies with the little girl is charming, and a scene on Sookie’s porch where she and Alcide express their reservations about who each is respectively living with has both heat and good humor. Skarsgard is great fun as the memory-free, uninhibited Eric whose attraction to Sookie remains even without him knowing their history. Moyer excels at scenes where Bill lays on the charm, as he does with Portia’s grandmother.

It’s all fun to watch and done expertly, but overall, there isn’t the sense of urgency that we’d expect to kick in about now. Still, TRUE BLOOD when it’s uneven is more engaging than most shows are at their best, so all is still well for viewers in the premium cable neighborhood of Bon Temps, LA.