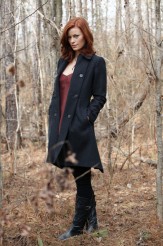 From 1912 to the death of her maker, it was a short run for the actress 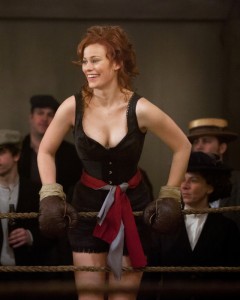 Once the LONGMIRE pilot was shot, the actress had about a year in between that and the second episode to fill. During that time she did a guest star run on the popular CW show THE VAMPIRE DIARIES. ASSIGNMENT X chatted with Freeman about LONGMIRE, but also got the chance to see what it was like for the actress to be a boxing vampire in 1912, and how she felt about having such a short story arc.

ASSIGNMENT X: How was being on THE VAMPIRE DIARIES? Did you know the arc for Sage was going to be “hello” and then “goodbye”?

CASSIDY FREEMAN: [Laughs] I did. Actually I knew from the beginning. They had this character they really wanted to put in from the stories. They asked me to do it and I was so honored, and I wanted to do it because I know a lot of the creators and producers on the show. So I told them I would love to do it, and they told me it would only be for three episodes because LONGMIRE wanted to make sure I was available when they needed me. So it was a scheduling thing. I thought that was OK, I die well. I enjoy dying. [Laughs] I think I’ve died eight or nine times on television at this point. My mother is horrified by that. I was glad to be there for that condensed period of time and have a lot of fun with that character, but I knew Sage was going to die.

AX: At least you got to wear some pretty period clothes.

FREEMAN: “Pretty clothes”? What do you mean…that onesie I was boxing in? With the corset and the eighty pound wig on my head? [Laughs] Yeah that was fun. Actually I’m joking but it was really fun. It was a half wig, so the front was my hair, but the huge braid obviously wasn’t my hair. First of all whenever you see a fight scene in a movie or a TV show, that scene started out as something twenty times longer and they always cut it down to three seconds. So it was an entire day of me boxing in a onsie, in 1912, with a wig on, and taking all their hits. I got hit a lot. I had muscles in my neck that I didn’t know I had that were sore the next day.

Related: Exclusive Photos from THE VAMPIRE DIARIES at PaleyFest 2012 event