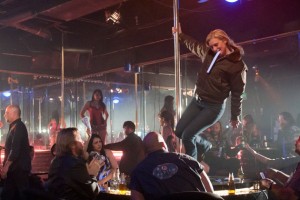 LONGMIRE had such a strong pilot last week that it became the #1 rated series on cable! How do you follow that up? With “The Dark Road” the numbers from the pilot doubled so I would happily assume that the series is going to be around for a good long while.

I loved the first episode of LONGMIRE. Being a Wyoming native that’s a Los Angeles transplant, this show makes me feel like I’m taking a quick trip home to see the mountains and the prairie each week. Having said that, I think that this second episode is even stronger than the pilot, and I can only guess that each episode is going to keep getting progressively better and better.

“The Dark Road” starts off with a young girl running alongside the road at night, and I though for a split second she just might be the Vietnamese girl from one of Craig Johnson’s books, but instead the story went in a completely original direction. The girl who gets murdered turns out to be a Mennonite who is going through her Rumspringa. This actually causes Longmire (Robert Taylor) and Vic (Katee Sackhoff) to investigate a part of Wyoming and a style of life that a lot of people probably don’t even know exists in the state. Mennonites are similar to the Amish in that they live a simpler life without technology, and they live in a rural setting. Rumspringa is a rite of passage that teenagers go through when they are sent out into the ‘bigger world’ to decide whether or not the Mennonite lifestyle is what they want for themselves.

Besides the case in this episode; Sackhoff fans more than likely went nuclear with Vic’s little striptease to get information out of the locals. Sackhoff can handle herself quite well on the private dancer stage, and there was just a small bit of irony that she stripped down to an olive tank top (which made her look a LOT like her former character Starbuck from BSG).

We also got a bit of a look inside the life of Cady Longmire (Cassidy Freeman) who is making the rather poor choice of sleeping with Branch (Bailey Chase). This story can only end in tears and possibly a broken nose or jaw for Branch, since he’s chosen to run against Longmire for the Sheriff’s office. I do like getting more of a back story for Cady. She’s a really enjoyable character and her connections with everyone in the show are something we never really get to see in the books, we just hear about them second hand most of the time.

Speaking of the print LONGMIRE vs. the television show LONGMIRE, I am firmly in the camp supporting this series to have its own adventures and exploits. As much as I love the books, I like being able to tune in each week and NOT know where things are going and who the killer is as soon as the episode starts. Hopefully they will show the infamous Busy Bee soon. This episode was horrible in its teases, and kept me thinking that we were going to get to see it, but alas maybe next week.

Another thing I need to mention before I wrap this up is the quality of the actors that this series is hiring. Rachel Clausen (Rebecca Wisocky) the Mennonite mother of the murdered girl is a perfect example of the caliber of actors they are using. In the scene where Longmire meets her by the tree and tells her about her daughter’s death…I actually got teary eyed. The actress’ glassy eyes, then breaking down to tears and folding in half was really well done, and shot in the blue of the night it was a touching moment.

Last but certainly not least, let’s chat about my love for Henry Standing Bear (Lou Diamond Phillips). Henry is my favorite character in the books, and it takes me titter every time Phillips says dialogue without using contractions (which is how he speaks in the novels). There were a couple in the pilot, but in this episode there was nary a contraction to be found in Henry’s vocal pattern. Thanks Lou! I really instantly love Henry in the show as well, and what’s the mysterious scene with Walt getting stitched up by a Medicine Man? I have a feeling this will be a bigger overreaching plot point for this first season. So until next week keep the Raineer on ice. You never know when the Sheriff might swing by!