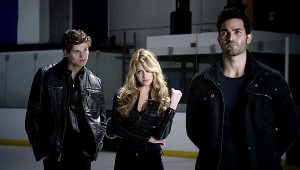 A war is brewing in TEEN WOLF and the question is – who will be on which side?

In the latest episode “Ice Pick”, you have Allison (Crystal Reed) discovering from her dad (JR Bourne) that boys are meant to be soldiers, girls are meant to be leaders (which probably explains why Allison’s mom is such a scary nut job).

Anyway, her dad kidnaps her and lets he know that her training begins now – she’s going to be a Hunter whether she likes it or not.

Meanwhile, her crazy mom Victoria (Eaddy Mays) discovers that Allison and Scott (Tyler Posey) are seeing each other again, which does not bode well for Scott in future episodes.

Also complicating things is Derek (Tyler Hoechlin) creating new wolves including Erica (Gage Golightly) – a girl who has suffered all her life (she has seizures, she’s the ugly duckling) and decides to join Derek and transforms overnight into a hottie (and one mean wolf).

Lydia (Holland Roden) is being haunted by the ghost of Peter Hale and we’re still not sure what that means. Is he dead? Is he in limbo? Has he been resurrected into her? The other thing that could be interesting — if the female Hunters are the leaders, then maybe the female wolves are the leaders too. And Peter gave Lydia the ability to be a leader? Hmmmm. It would be a nice piece of symmetry.

Oh, and Jackson (Colton Haynes) is still pissed he’s not a wolf and being a real douche bag to Lydia. He’s immune somehow, yet by the end of the episode he’s gained super strength. 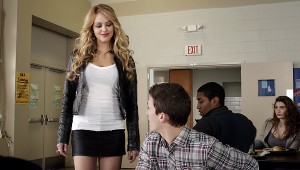 This episode feels like to a set-up to next week’s pay-off. There’s many elements set into place, but not much is done with those pieces – yet.

Jackson being a douche bag and a martyr is getting real old. Hopefully that gets resolved soon, because it’s getting really annoying.

I did like Allison/Scott and Lydia/Stiles (Dylan O’Brien) get when they sneak into the ice skating rink for some one on one time. It’s a reminder that these are kids after all – and there is some serious love going on between Allison and Scott, while Stiles is still pining away for Lydia who plays coy or is sincerely unaware he likes her.

In one of the more overt product placement moments, Stiles gives Lydia a candy bar as a token of his affection. It’s a really weird and awkward moment, but, oh well – a show needs its sponsors, so if it keeps TEEN WOLF around longer, I’ll live with it, even if I don’t like how it was handled here.

“Ice Pick” Is also another reminder of the excellent cinematography the series has. Jonathan Hall brings a cinematic feel to so many shots and there’s a ton of coverage – moreso than most network TV series.

Another unsung hero on the show is Orny Adams as Coach Finstock. This guy is hilarious every time he’s in a scene. There’s always just enough of him to make it count – and he’s a riot. He can take any line give it a excellent snarky twist. Here’s to more Coach Finstock in the future – may he never become a creature of the night.

Finally, there’s more to Scott’s veterinarian boss Mr. Deaton (Seth Gilliam) and he finally decides to reveal to Scott who he really is – but that will have to wait until next week too.

TEEN WOLF continues to have tight writing, offbeat humor and solid action. It was cool to see Scott take on Derek’s new wolf pack, even if the fight did take place on the ice rink (which was a  bit cheesy). And most importantly, it’s cool that the series continues to move the story along quickly and efficiently. It’s clear we’re building up to something big – and just like any great series, I can’t wait to find out where all this is heading.