The season doesn't stop delivering with its great story, scares and more 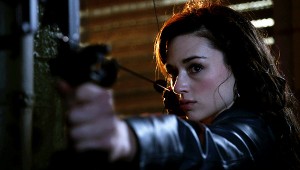 TEEN WOLF delivers another strong episode (and we’re only two episodes into Season 2) as the wolves are showing themselves with the full moon on the horizon.

What this means for Scott (Tyler Posey) and his friends is a whole lot of trouble.

Now that Derek (Tyler Hoechlin) has become the Alpha wolf, he’s turning willing participants who want to be part of his pack. In “Omega”, Issac (Daniel Sharman) turned. He has an abusive dad who likes to lock him up in the basement when he misbehaves. When his anger gets the best of him, his father ends up dead, but did he kill him or was it someone (or something) else.

It’s now up to Scott to try to protect Isaac from the Argent family who are out for revenge on all wolves. There’s no mercy, no code – just death.

In order to weed out potential wolves they oust the current principal and instate Gerard Argent (Michael Hogan), who also happens to be the grandfather of Allison (Crystal Reed). A perfect solution — though a little far-fetched. Who vetted Gerard from the city government is such a speedy changeover (then again, maybe the Argents tortured the City Council too).

Scott is once again lectured by Derek that he needs to join his pack since he knows what happens to the Omega wolves who try to go at it alone. Meanwhile, Allison uses her archery skills to help her Scooby gang try to stop her grandfather’s henchman from killing Isaac.

Meanwhile, Jackson (Colton Haynes) decides to videotape his first night of transformation as a wolf, but when he wakes up to watch the tape – nothing has happened. Looks like he’s not going to get the wolf powers he so desperately wanted.

And what happened to Lydia (Holland Roden). It’s still a question mark, but could she potentially be the weird creature killing people around town. Could she be a shape shifter? And how different is that from a werewolf. Only time will tell.

One of the best aspects of this season is having Allison in on the activities with Scott and Stiles (Dylan O’Brien). Plus, you know the relationship between wolf and the would-be Hunter in Allison is going to come to a head at some point.

“Shape Shifted” once again proves why this series is so addicting. It doesn’t follow the formula for regular serialized television, it doesn’t stand still for too long and it moves at a break neck pace. So much happens, and the endings are so deliciously perfect, you can’t help but want more and to turn in the next week.

It was announced that TEEN WOLF made the cut in a California Tax Credit fund for relocating to Los Angeles – that’s assuming there is a Season 3. With that in mind, it only hints that if the show moves to Los Angeles, the series itself might make some gigantic leaps and reboot the series so it doesn’t have to match the location to what has been established in Season 1 and 2.

In the meantime, sit back, relax and enjoy the second season. MTV has a winner on its hands. Hopefully, in between new seasons of their reality series THE REAL WORLD, TEEN MOM and others of its kind, it realizes what a special kind of scripted series it has with TEEN WOLF.