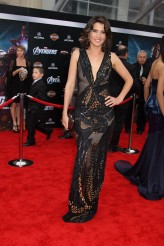 Cobie Smulders is Maria Hill in THE AVENGERS | ©2012 Marvel Studios

Cobie Smulders has long been hailed for her comedic prowess as Robin Sherbatsky on HOW I MET YOUR MOTHER, now gearing up for its eighth season on CBS. However, with writer/director Joss Whedon’s box-office superhero THE AVENGERS from Disney and Marvel, Smulders shows off her action star side as S.H.I.E.L.D. agent Maria Hill, running, sliding and shooting with the best of them.

There are big differences in doing a weekly TV comedy series and a giant studio action feature film, Smulders notes.

“It’s definitely a shift in schedule,” says Smulders. “I made it a point to do a lot of training to prepare myself for this role with weapons and to get myself comfortable using them and that was the thing that I tried to do the most. In terms of scheduling, it was very different. I’m very blessed to have my job. I am a mother, so I have a very nice schedule [on MOTHER], and this too was very good, but we had a lot of stunts to do and a lot of fun things to explode.”

Like most of her AVENGERS castmates, Smulders says that she felt the most memorable moment of making the film was the initial group read-through of the script.

“I was very much a newbie coming in,” she says. “When I got to do a scene with most of them – I don’t think Jeremy [Renner] was there, but when I got to see everybody sitting at the table for the first time I got to [think], ‘Yes, I can see everybody!’ I also loved any moment I got to work with [Whedon], because I’d wanted to work with him for a very long time.” 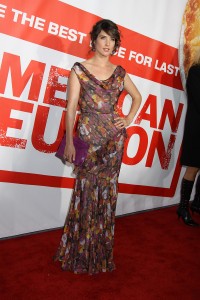 “I’m classic,” Smulders replies. “I like SUPER MARIO BROTHERS, the very first one, with the mushrooms.” She then playfully sings a bit of the game’s theme: “Doo, doo, doo, dooloo do.”

What does Smulders playing an action hero mean for how her daughter sees her mom on film?

“It means a lot more action figures in our house,” Smulders says with a laugh. “I think we have all of them and she knows all of the names.” More seriously, she adds, “But it’s very cool to be a woman in a man’s world in this film and have my daughter see that.”

Related: Five Villains We Want To see in THE AVENGERS 2 & 3