The actor talks Loki, plus F. Scott Fitzgerald in MIDNIGHT IN PARIS 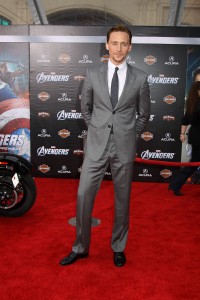 EDITOR’S NOTE: There have been some questions about one of the quotes in this interview. We have checked the interview tape and it turns out we missed an “if.” We have corrected the quote.

Where there are superheroes, there must be a supervillain. In writer/director Joss Whedon’s film THE AVENGERS, that supervillain is Loki, an extraterrestrial played by Tom Hiddleston, who tries to enslave the Earth with the help of a mysterious but extremely violent alien race.

Hiddleston, who hails from London, England, originated the role of the adopted brother of the mighty Thor, played by Chris Hemsworth, in 2011’s THOR. Hiddleston has a strong stage background in the U.K. and costarred in the 2008-2010 BBC-made series WALLANDER with Kenneth Branagh, who directed THOR.

Hiddleston is currently filming in the title role of a telefilm of William Shakespeare’s HENRY V, having wrapped on HENRY IV PARTS I & II. This interview finds him seated in a hotel room at the Beverly Hills Four Seasons after a huge press conference, cordially giving us more details on Loki.

ASSIGNMENT X: When you did THOR, did you think you were going to be reprising Loki? Did they tell you at the time that you got THOR that it was very likely you’d be doing more films for Marvel?

TOM HIDDLESTON: They did say that, but there was no guarantee that it was going to be such a big part, I think.  And I also felt like if I’d been rubbish in THOR [laughs], there was no way I was going to come back. So it was one step at a time and I was very lucky that, as we were coming to the end of shooting THOR,  Ken Branagh showed Joss a rough cut of the film and Joss loved it, he loved what Ken had done with it and was really about what Chris [Hemsworth as Thor] and I had done on it and [Whedon] said, “I want to take that relationship and make the stakes higher. You’ve got these two brothers who are fighting each other and now what’s at stake is the fate of Planet Earth, because that’s what’s going on.” So it’s really exciting. 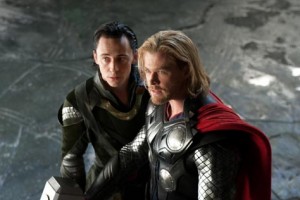 AX: Were you familiar with THOR or any other Marvel comics growing up?

HIDDLESTON: Well, it’s funny, because I grew up on these U.K. comics called THE BEANO and THE DANDY, because most people’s access to Marvel and D.C. is a meta one – it’s cartoons and trading cards, I guess. But comics – the thing is, I was introduced to American comics through the movies. Christopher Reeve’s Superman was the first superhero I ever conceived of when I saw the movie when I was six or something. And I loved it and it’s really that film and also Tim Burton’s BATMAN that kind of were my first early superheroes.

AX: You’ve voiced Loki for the THOR videogame. Do you play any videogames?

HIDDLESTON: I don’t know videogames either. The last videograme I played [laughs], apart from DANCE DANCE REVOLUTION at [AVENGERS castmate] Jeremy [Renner]’s house – the last videogame I played before that was SUPER MARIO on the Super Nintendo, back in the Dark Ages. 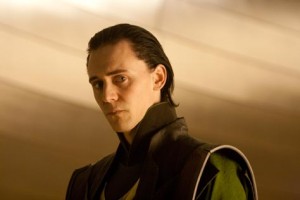 AX: Loki is historically the god of mischief from Norse legend, and of course he’s in the THOR comic books. Did you have any fears about playing such a relatively well-known character that viewers might have preconceptions about?

HIDDLESTON: I never get afraid of things, I only get excited. It’s just so much fun, he’s such a great character, never mind the iconography. I don’t know, it’s like playing an iconic Shakespearean character or something, it’s just a privilege to be asked to do it and for a character like Loki to have such a level of complexity and so many layers to him, so many things to explore, especially when he is as well-written as he was in this film by Joss. When I read it, I couldn’t believe my luck. The film is called THE AVENGERS, and yet Loki was on almost every page. He’d taken what I’d built with Kenneth Branagh and he’d taken it further and it was as damaged and psychologically interesting as I hoped it would be, but it was also darker and funnier and demanded so much commitment. I just was so excited by it, so there was no place of fear, just a huge amount of fun. 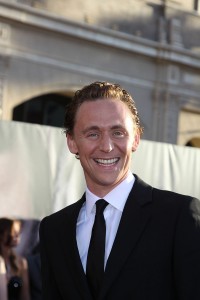 AX: AVENGERS is a multi- superhero movie, so a lot of the characters have elaborate costumes. Loki’s regalia is right up there in terms of complexity, but did you ever have costume envy for any of your fellow actors’ attire?

HIDDLESTON: It takes two hours to get into Loki’s outfit sometimes and it’s even more fun when you fight in it. The sweat pools and it’s really a luxurious experience [laughs]. The thing that I should say – I want to publicly salute [AVENGERS costume designer] Alex Byrne, because when you have to conceive of costumes of this scale, you’re risking ridicule. I mean, these are monster costumes, and the last thing you want is for it to look silly or camp. And yet it has to look larger than life and heroic. And her work on it was amazing, and she worked with everybody in terms of making them practical, and so you could fight in them, you could jump in them and roll around. And my costume particularly does so much of the work for me, because Loki’s silhouette is so incredibly menacing. Those clothes are so mean – it’s leather and metal and gold. But there were days when I longed for the suit [that Clark Gregg got to wear as Agent Coulson] – Dolce and Gabbana. In the museum [scene in Germany, Loki had] three hours in a nice suit.

AX: Did you have any historical figures or even fictional figures that inspired your take on Loki?

HIDDLESTON: Well, the thing that I suppose is closest to my heart is Shakespeare. I really am a nerd about Shakespeare, I love it [laughs] and the reason why is because he’s one of the wisest, most compassionate writers in the course of Western literature, in the course of all literature. And he understood human nature so deeply, not just our great capacity for virtue and for goodness, and for love, but our capacity for pain and destruction and anger. His bad guys are the best bad guys in the biz, like Iago in OTHELLO and Edmund in KING LEAR and Cassius in JULIUS CAESAR. And they were touchstones for me in terms of, when I created Loki with Ken Branagh, we talked about Edmund the bastard son, someone who’s grown up in the shadow of another man. In KING LEAR, Edgar is the legitimate son, the elder son, the favored son, and Edmund is the bastard, the illegitimate, the one who’s less loved, under-loved, which feeds his lack of self-esteem, and then Iago is the ultimate chess master, the incarnation of evil, somebody who’s bringing people down and you’re not quite sure why, but he’s motivated by some terrible jealousy and ambition. And then MACBETH – Macbeth is undone by his ambition, and I think the same is true of Loki. So I guess those are my touchstones.

AX: Have you been involved in any of the Shakespeare readings at Joss Whedon’s house that led to his filming of MUCH ADO ABOUT NOTHING?

HIDDLESTON: I haven’t, actually [laughs]. But we talked about it a lot, we talked about Shakespeare, and I’m desperate to see his MUCH ADO ABOUT NOTHING, can’t wait to see it.

AX: Last year, you played famous real-life writer F. Scott Fitzgerald in Woody Allen’s MIDNIGHT IN PARIS. What kind of research did you do to for that role?

HIDDLESTON: You know, I read as much as I could in the time that I had and reread stuff and one of the favorite things that I did was, Alison Pill [who played Fitzgerald’s wife Zelda] and I had a day in each other’s company before we shot, to get to know each other, and we were staying at a hotel in Paris called the Bristol, and we sat on the roof of the hotel. It was a really sunny day and she had a book of the letters that Scott and Zelda Fitzgerald sent each other. It’s a compilation of all of their letters that they sent to each other in their lives, and they’re some of the most romantic, intimate beautiful writing I’ve ever read. And then, on the suggestion of Corey Stoll, who played Ernest Hemingway, I downloaded a reading of THE GREAT GATSBY by – I can’t remember the name of the actor off the top of my head, but he sounded like Orson Welles, and then I walked around Paris for three days listening to this very venerable American actor who sounded like he was from Princeton in 1929 reading GATSBY and I found it so kind of inspiring.

AX: Do you have a single most memorable moment from you AVENGERS experience?

HIDDLESTON: For me, there are so many things that are memorable about it, because it was such a long shoot. It was the whole summer for all of us and we had so many different experiences together and it was an amazing time for me to work with all of these [people], some of the greatest actors in the world. But I think probably the thing – if you said, ‘How was THE AVENGERS shoot?’, there’s an image in my mind, which was the first day on set that everybody was there together, and it was insane, the picture of everybody in costume, and all of these actors and all of these characters in their chain mail and their capes and their armor, except for Mark Ruffalo in his gray-and-white pajamas. But to see everybody finally assembled, it was an extraordinary moment, and just the picture of the Avengers, it’s amazing.

HIDDLESTON: Yes, I am.

AX: Is there anything you’d like to say about the whole AVENGERS experience that hasn’t come up today?

HIDDLESTON: Gosh. I suppose I’m so lucky. The one thing I haven’t said is, I felt like the undergraduate in this cast. Most of the people in this film have been nominated, if not won, Academy Awards [laughs] and I’m so lucky to work with them. They are the best in the business, and they’re huge movie stars and the reason they’re huge movie stars is because they’re such great actors and when you work with great people, you raise your game and I just feel so lucky that I’ve had the chance to work with them.