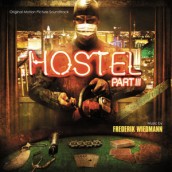 Intended horror franchises never die. They just go straight to video, where, if they’re lucky, they’ll end up in the bloody musical hands of Frederik Weidmann. With a ghoulishly refined ability that’s made his soundtrack sequels to THE HOUSE ON HAUNTED HILL, MIRRORS and HELLRAISER into scores whose quality is worthy of the big screen, DV’s go-to-it composer has more than proven that his work is anything but torture to listen to.

That craftsmanship is no more apparent than in the passing of the HOSTEL baton from Nathan Barr for the movie’s third time out, this time in Las Vegas. While there’s nothing glittering about Weidmann’s treatment of the evisceration club amidst tonier surroundings, what “Freddie” does give his HOSTEL entry is its own, fast-paced identity. Most surprisingly, III plays much more like a dark suspense score. For instead of getting strapped into a chair here, Weidemann’s strong orchestral approach conveys the feeling of running for one’s life alongside Jason Bourne, his breathlessly suspenseful approach abetted by propulsive samples, haunted voices and a surprising reliance on melody as opposed to the kind of musical shrieking that’s the true torture of so many horror scores today.

Sure the sequel might be downsized as such, but HOSTEL PART III sounds positively epic in scope. It’s a throttlingly menacing and well-performed score that once again shows how Weidmann’s impressive genre chops belong on the big screen first. In the hopefully short meanwhile, be sure to throw your gore-soaked chips down on HOSTEL PART III‘s quickly disappearing Varese limited edition, or via iTunes.

Click on Link: To Purchase the HOSTEL PART III soundtrack