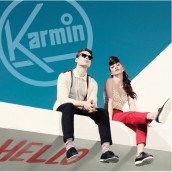 You Tube is becoming a new venue for young, emerging artists to prove their mettle and gain a fan following. The way Karmin (aka couple Amy Heidemann and Nick Noonan) did it was by doing quirky covers of popular songs.

Their biggest splashes was a stripped down version of Chris Brown’s “Look at Me Now and Nicki Minaj’s “Super Bass.” In a weird way, they made these hip-hop songs even better with their back-to-basics aesthetics and Heidemann’s incredible rapping prowess. Frankly, she put Minaj and Brown to shame – and also proved she’s a very capable pop singer to boot.

The music industry took notice and they were signed pretty quickly to Epic Records with the result being HELLO – an E.P. of seven quirky songs.

The problem? The songs are heavily over-produced and contain a ton of rapping, which should have been used sparingly. We know Heidemann can rap, but she’s also a phenomenal singer – why hide it?

The standout track on HELLO is “Brokenhearted” – a fantastic, pure pop song with just a little rapping thrown in for good measure. It’s catchy, bouncy and the best produced track on the album.

“I Told You So” features Noonan and Heidemann sharing vocals, but the song itself it pretty thing. It feels more like an excuse to resurrect the fast rapping Heidmann perfected on her Chris Brown cover “Look at Me Now.”

“Too Many Fish” is a generic Beyonce-esque track, though the last song “Hello” rounds out the album with a strong electro-pop beat.

The label seems to be positioning Heidemann as a more accessible Nicki Minaj – which is a good comparison since both have an infectious personalities and addictive rapping abilities. I would also say that Heidemann sort of makes rap accessible since Karmin has never been one to employ the oft-used profanity and insults that tend to be a crutch in most rap recordings (even when they do cover versions).

Still, it’s a shame Karmin didn’t take what they learned with their “Super Bass” and “Look at Me Now” covers. If they did a whole album where they spun the whole genre on its head with their own hybrid brand of rap-pop it would have been quite daring. Instead, this E.P. is a disjointed affair anchored by a fantastic first single “Brokenhearted” (which you should download immediately).

You almost want to hear what the Karmin who does cover songs would do to the Karmin who just released this E.P. I’m sure it would be even more daring and exciting – and that’s the sad part because Karmin has so much potential. This release, unfortunately is just a small taste of what these multi-talented musicians are truly capable of.