The actor talks playing Hawkeye and his favorite stunt 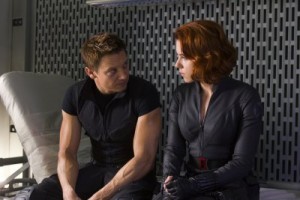 Jeremy Renner and Scarlett Johansson in THE AVENGERS | ©2012 Marvel Studios

Jeremy Renner is no stranger to playing men caught up in violent activity on the streets or in war. He got a Best Actor Oscar nomination for his work as a military bomb-defusing expert in THE HURT LOCKER and he’s had key roles in SWAT – alongside THE AVENGERS colleague Samuel L. Jackson – THE TOWN, MISSION IMPOSSIBLE: GHOST PROTOCOL and 28 WEEKS LATER. Renner also gave a mesmerizing performance as the title character in the fact-based film DAHMER and has even played a vampire in an episode of THE AVENGERS writer/director Joss Whedon’s TV series ANGEL back in 2000. However, until Renner took on the role of Clint Barton, aka Hawkeye in THOR, he’d never played a Marvel superhero before.

Barton is a member of the world-protecting S.H.I.E.L.D. organization. His archery skills surpass that of even the most adept practitioners with bows and arrows. However, he’s fully human, which puts him in a little more immediate peril than, say, Thor (Chris Hemsworth) when cars start flipping over and buildings start collapsing.

The mood is mostly jovial, with Renner giving playful answers to many queries and prompting his associates to do the same. 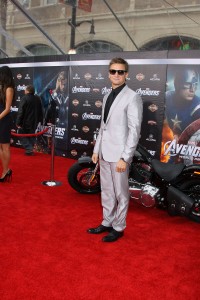 But then Gregg makes a joke about liking DANCE DANCE REVOLUTION.

Renner deadpans, “There’s an AVENGERS version of DANCE DANCE REVOLUTION. That should be videotaped.”

Hiddleston gets in on the evolving joke. ”I don’t know videogames,” the British actor says.. “The last videograme I played [laughs], apart from DANCE DANCE REVOLUTION at Jeremy’s house …”

“Which you were very good at,” Renner mock-reminds him.

“I was,” Hiddleston asserts. “Scarlett [Johansson, who plays Barton’s platonic friend Natasha Romanoff/Black Widow] and I will always have ‘Billie Jean.’”

Reportedly, Renner sustained a muscle injury from shoulder to back during the filming of THE AVENGERS, but when asked if he got hurt on the set, he just replies, “Yeah, I broke my heart.”

So how did Renner prepare to do all those super-heroic archery scenes?

“I stretched a lot – I prepared by stretching,” Renner says with a laugh. “I did take some archery, but I realized very quickly that I couldn’t really use it in the film. It ended up being superhero-type archery, which – it’s nice to know the technique behind it, but then I’m shooting behind my back and over my shoulder.” Real archers don’t do these things, for obvious reasons. “But I did try to give it a go. I shot at a few targets, missed a few.”

Does Renner have a favorite stunt in THE AVENGERS? “I loved being beat up by Scarlett – wouldn’t you?”

Renner says his most memorable moment during the making of THE AVENGERS is the same one cited by many of his fellow superhero players.

“Oh, well, it’s the same thing – it’s when everybody was together,” he reveals. “That’s the most memorable and creepy. Getting to play with Thor’s hammer while he stroked my bow – here we go, that’s going to get me in trouble,” he quips. “No, just getting all of the actors in one room, all in costume. It was like Halloween – they’re human, now they’re dressed up like silly people and it’s great to laugh at each other and that will always stick in my mind.”