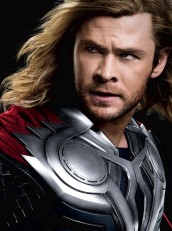 ©2012 Marvel Studios
Chris Hemsworth is Thor in THE AVENGERS
Interviews

Interview: THE AVENGERS star Chris Hemsworth hammers down on Thor

The actor talks playing Thor and working with his celebrated colleagues 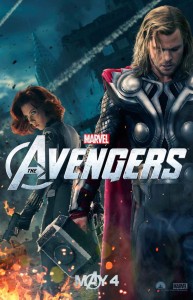 With his mane of hair pinned back, a big grin and a booming laugh, Hemsworth sounds very happy to discuss AVENGERS, which has already garnered enthusiastic audience reaction and is on track to be a blockbuster well before its May 4 opening.

Hemsworth says the most memorable day of shooting THE AVENGERS was, “My first day on set.”

“[Seeing] the whole ensemble, which was pretty a exciting and nerve-wracking experience, but it was amazing,” he admits.

Although many of the other characters are extraordinary, Thor is the only extraterrestrial among the group of heroes (Loki is also an alien, but he’s not part of the group, being the villain). This makes Hemsworth’s character even more of an outsider than his comrades, though the actor says he isn’t sure Thor is that different from the others.

“[Thor is a] fish out of water, yeah. I mean, we all kind of fell into that category,” says Hemsworth. “Joss said early on ‘dysfunctional family’ and we all belong here due to the fact that we don’t belong anywhere else. Thor is from another planet. I guess he’s [caught up in] the conflict and the villain, who’s far more personal [to Thor] than the rest of them, because it’s his brother.”

It helped, Hemsworth adds, that he and Loki actor Hiddleston had already done THOR together.

“So it was nice to really shoot that film and have that relationship with Tom,” he adds. “That was my purpose, anyway. But we [the Avengers as characters] all kind of didn’t get along at the beginning and certainly [Thor and Loki are] from some other planet, some other world. So it was fun to play that dynamic.” 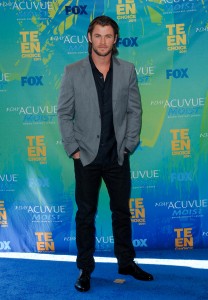 In the midst of an all-consuming battle, the camera spins 360 degrees around the assembled Avengers. What was it like to do that shot?

“I remember thinking on that day, that, ‘Yeah, this is the trailer shot,’ or ‘This is the big moment,’” Hemsworth says, “because we’d been on the [airship] bridge in the first scene in which we were all together, but we weren’t getting along at that point. Whereas that lineup, we finally were assembled and there and a team and a big three-sixty wide shot, and all the chaos around us. And I certainly remember thinking, ‘Yeah, this is the moment.’”

Many films have fake titles when shooting so that onlookers won’t crowd the set. Hiddleston had mentioned THE AVENGERS went by GROUP HUG while it was on location. Hemsworth says the set was a pretty friendly place.

“Tom loves hugs and I did [THOR] with him and there were plenty of hugs in that film,” he says. “Group hugs, though, I don’t know. [During THE AVENGERS shoot] Chris [Evans] sent us a text and said, ‘Avengers Assemble at such and such bar at nine o’clock’ on a Saturday night. That was a good group effort.”

Despite all the big names in THE AVENGERS, Hemsworth said he doesn’t recall any big displays of ego.

“I keep getting asked about who was the biggest diva – this is the first time I worked with these guys,” says Hemsworth. “I think we all are either that well-behaved or everyone kept each other in check. No one wanted to be the one who screwed up.”

With brothers in real life – one of them HUNGER GAMES’ Liam Hemsworth – does Hemsworth base any of Thor’s relationship with Loki on his actual siblings? He pretends to mull that over.

“The last time one of my brothers tried to take over the world – the universe – how did I feel?” he laughs, then gives a more serious response. “When we did THOR, [director] Ken Branagh kept saying, ‘Let’s not get caught in playing gods and what have you, let’s be truthful. You have brothers, and how do you relate to that?’ And that became the thread of truth through this, which was, I can give my brother a hiding [beating] and tell him off, but no one else can.”

Costar Downey has a question of his own on the topic. “Do you feel that Liam is trying to take over your box office universe?”Downey asks Hemsworth.. ”Does he need to be corrected in some way?”

“He’s got a few bruises,” Hemsworth jokes. “Yeah, there’s a race at the box office.”

Speaking of bruises, Hemsworth acquired some of his own during the AVENGERS shoot, he reveals. 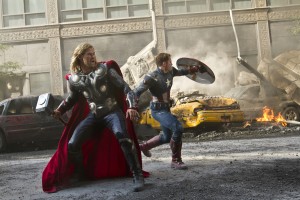 Chris Hemsworth and Chris Evans in MARVEL'S THE AVENGERS | ©2011 MVLFFLLC

“The scene where Thor takes Loki off the ship and lands and then we go into the big two-hander, I was on a wire, because I hadn’t learned to fly yet,” he deadpans, “and I come down and land on the cliff and we have the conversation. The first couple of takes – and this is going to turn up on the DVD extras – I just face-planted into the dirt, very ungraceful and un-superhero-like. That’s my story.”

Although the fate of the world is at stake in THE AVENGERS, and this is played very straight, the film is also infused with a sense of humor, which Hemsworth attributes largely to filmmaker Whedon. “The script, the line where I say, ‘He’s adopted’ got a big laugh [at the premiere screening]. I had no idea. When we shot that, I thought, ‘Is this really funny?’ But that’s the thing – all that stuff by Joss – he’s hilarious. And then the whole film, I was surprised how the comedy played so well.”

One of Hemsworth’s favorite scenes in the film involves the Hulk – the actor says he looked forward to shooting the sequence after reading it.

“The section where the Hulk and Thor finally are on the same team and fighting the aliens and when they end, Thor’s just standing there, out of breath, and Hulk just backhands Thor,” he says. “That was something to look forward to,” he laughs, “you had me on a wire, just getting yanked out of shot. That was good.”

What does Hemsworth like best about his mighty character?

“I like this visceral gut instinct that Thor has, and there’s a bit of a childlike quality in the sense that if he believes something, if he wants to do something, he does it and says it,” concludes Hemsworth. “Kids own their environment. There’s no opinions that they really care about. And I think [with] Thor, it’s there. He’s surrounded by violence, strength and all of that, but at the end of the day, he’s pretty true to who he is. And I think that was fun to play with.”

Related Link: Will the AVENGERS shoot a new scene for the movie before its release? Robert Downey Jr. says so