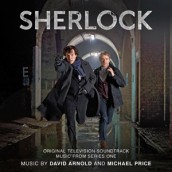 The music is afoot over two series (and gradually counting) of this 21st century take on Arthur Conan Doyle’s famed characters, as given the revamp mojo by the BBC’s DOCTOR WHO team to equal international acclaim, and an Emmy nomination (among the show’s many) for composers David Arnold and Michael Price.

It’s elementary that these two would hip up Holmes’ sound for its new takes on such classic Doyle stories as “A Scandal in Belgravia” and “The Reichenbach Fall,” pretty much wiping away the once-traditional, solo orchestral sleuthing to combine strings with such neo-futuristic sounds as sampled percussion synth samples and an echoed piano, a fresh approach that firmly puts Sherlock and Watson into the era of modern day detective work. It’s intriguingly throbbing, invigorating stuff that bounds between the eerie and the playful, conveying the constant, deductive whirring of two brilliant minds as well as their quip-filled relationship.

Yet as determinedly present-day as Arnold and his own musical Watson make SHERLOCK, the composers are sure to bring such 19th century instruments to the fore as the cimbalom and the Holmes’ violin fixation, giving a rhythmically energetic approach to the dynamic duo that nicely links their TV Sherlock to Hans Zimmer’s steampunk vibe for the movie detective on this side of the pond. Silva Screen’s separate CD’s for Series One and Two are captivating listens, with the “best of” approach for the first album leading to suites from “Belgravia,” “Reichenbach” and “The Hounds of the Baskerville” for the second entry, music that shows Arnold and Price as getting even cleverer at bringing new, pulsating life to an iconic, trench-coated character, whilst thankfully not forgetting his legendary musical past.