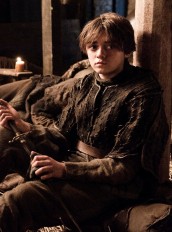 The big clashes come nearer as the regular battles rage, but what makes the GAME OF THRONES episode “Garden ofBones” so exciting is that we see a number of characters deepening for better and worse. Daenerys (Emilia Clarke) is more fiery than ever, Joffrey (Jack Gleeson) shows even more hateful sadism than previously, “red lady” Melisandre (Carice Van Houten) shows why she is such an asset to her lord and a somewhat monstrous figure, and Tyrion (Peter Dinklage), bless him, demonstrates continued canniness. Even Lord Tywin Lannister (Charles Dance) shows a kinder side than we imagined he had.

After a victory in battle, Robb Stark (Richard Madden) is smitten with battlefield healer Talisa (Oona Chaplin), who opposes the entire war.

Robb’s mother Catelyn (Michelle Fairley) is at the camp of Lord Renly Baratheon (Gethin Anthony). Catelyn is visited by Lord Baelish (Aiden Gillen), much to her fury. Baelish was Catelyn’s childhood friend and still loves her, but Catelyn (rightly) blames Baelish for betraying Catelyn’s husband Eddard, who was executed by King Joffrey. Baelish gets Catelyn’s attention by offering to exchange Catelyn’s two daughters (although he’s only really got one of them) for the king’s uncle Jaime Lannister (Jaime is currently being held by Robb’s troops). Baelish also brings Catelyn Eddard’s remains so that he can receive a proper burial.

Catelyn wishes her host Renly and his brother Stannis (Stephen Dillane) would join forces, but both have claim to the throne and neither is willing to cede to the other. When Renly refuses to yield, Stannis secretly sends his priestess/lover Melisandre, worshipper of “the Lord of Light,” to the shore near Renly’s camp. There Melisandre gives birth to a being that appears as a monster of fire and smoke.

In the capital of King’s Landing, King Joffrey prepares to have his fiancée Sansa Stark (Sophie Turner) beaten with a sword as punishment for her brother Robb’s victories against the Lannister forces. Tyrion arrives in time to prevent Sansa from being injured. When Tyrion asks Sansa about whether she still wishes to marry Joffrey, Sansa remotely replies that Joffrey is her lord and one true love. Impressed by Sansa’s ability to lie, Tyrion muses she may survive them all.

In a well-intentioned but ill-fated attempt to get Joffrey to relax, Tyrion summons two prostitutes to Joffrey’s chambers. Instead of having sex, Joffrey, pointing a crossbow, forces one of the women to beat the other.

Tyrion, having discovered that his cousin Lancel (Eugene Simon) is bedding Tyrion’s sister/Joffrey’s mother Queen Regent Cersei, blackmails Lancel into reporting everything Cersei says and does back to Tyrion.

A group of Lannister soldiers hold the boys – including the disguised Arya Stark (Maisie Williams) – as prisoner. Each day, the soldiers torture and murder one of their captives. This practice is stopped abruptly by the arrival of Lord Tywin Lannister, richest man in the realm and the soldiers’ commander. Tywin demands that all of the prisoners be put to work. He recognizes that Arya is a girl and takes her to be a cup boy.

In the deserts, one of Daenerys’ men rides back with news that the walled city ofQarthextends an invitation to “the Mother of Dragons.” Daenerys and her small band are greeted at the Qarth city gates, but one of “the Thirteen” who rule here insists that Daenerys first show her dragons to the city elders. Daenerys hotly refuses, demanding hospitality first. The stalemate is broken by Xaro Xhoan Daxos (Nonso Anozie), who takes responsibility for the visitors. Daenerys and her Dothraki followers are allowed into Qarth.

The dialogue in “GardenofBones” sings and zings, even with the supposedly “dull” Stannis and his dismayed but loyal captain Davos (Liam Cunningham). Clarke puts her all into both Daenerys’ charm and rage, while the scene between Fairley’s infuriated Catelyn and Gillen’s smitten, duplicitous Baelish is wonderfully rich and dimensional.

As for Melisandre and her strange spawn, it’s certainly enough to scare anyone. It seems no coincidence that Lucifer is known as the Light Bearer or Bringer of Light. Between this, Melisandre’s penchant for using fire and her creepy offspring, we (if not her king Stannis) have some serious questions about the nature of the god she serves so faithfully.

We sense that poor Renly is doomed – too bad, because he really does have, as Baelish observes, an interesting marriage – but there are dozens of little cliffhangers here with no clear answers. The delight of GAME OF THRONES is that the journey is every bit as satisfying as the eventual solutions.