TV Review: GAME OF THRONES – Season 2 – “What Is Dead May Never Die”

An episode full of intrigue, with a lot of moral ambiguity and action 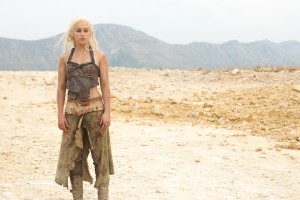 GAME OF THRONES has all sorts of political machinations afoot in “What Is Dead May Never Die” (the episode title is part of the blessing of the Drowned God in the Iron Islands). It’s strong and we wonder what the hell will happen, as our sympathies are bounced around several groups and even a few individuals we largely despise.

Jon Snow (Kit Harington) has witnessed the Wildling lord Craster (Robert Pugh) leave an infant – Craster’s son by one of his daughters – in the woods with a strange creature. Craster caught Jon, knocked him out and demands that the Night’s Watch Lord Commander (James Cosmo) remove his men by morning. Jon is horrified to learn that the Commander knows that Craster sacrifices his infant sons, but the Commander says they need Craster in order to fight the other things north of the Wall.

In the Iron Islands, Theon Greyjoy (Alfie Allen) is dismayed when his lord father Balon (Patrick Malahide) decides to invade rather than join with the Northerners. Balon treats Theon as a near-traitor to be watched, though Theon points out that Balon gave Theon away as a hostage. Theon almost writes a letter warning his adoptive brother Robb Stark, the “King of the North” now, but thinks better of it.

Robb’s mother, Lady Catelyn Stark (Michelle Fairley) goes to the late King Robert’s brother Renly Baratheon (Gethin Anthony), shortly after Renly has married Margaery Tyrell (Natalie Dormer). Lady Catelyn wants Renly and his soldiers to join Robb in battle against the presently ruling Lannisters. Renly considers this, but he has other problems – he’s actually in love and bedmates with his wife’s brother Loras (Finn Jones). Margaery proves surprisingly understanding about the situation, but says that Renly must impregnate her if he is to secure his reign.

In the capital city of King’s Landing, Tyrion (Peter Dinklage) feels he needs a safe hiding place for his mistress Shae (Sibel Kekilli), so he has her assigned as a lady’s maid to the unhappy Sansa Stark (Sophie Turner), who is still engaged to Tyrion’s awful nephew, King Joffrey (Jack Gleeson). To see who can be trusted to keep secrets, Tyrion also tells Grand Maester Pycelle (Julian Glover), Lord Varys (Conleth Hill) and Lord Baelish (Aidan Gillen) three different stories about his plans for marrying off Princess Myrcella (Aimee Richardson) for three different alliances. When Queen Regent Cersei (Lena Headey) finds out – about Tyrion’s plans to send Myrcella to Dorn (not the other plans) – she is hysterical with fury and fear. Tyrion points out that Myrcella will be far safer in Dorn if the city falls. As Pycelle is the one who told Cersei the secret, Tyrion has him thrown in the dungeon. Meanwhile, Tyrion hopes to use Baelish to free Tyrion and Cersei’s brother Jaime, presently held captive by the Starks.

In the Stark stronghold of Winterfell, young crippled Bran (Isaac Hempstead-Wright) says he dreams of being a wolf, possibly as the result of his bond with his pet direwolf Summer.

The group of young men – and Arya Stark (Maisie Williams), posing as a boy – is once again beset by Joffrey’s men. When Yoren (Francis Magee) stands up to the soldiers, he is killed and Arya and the other boys are captured or killed. However, the youth the king’s men are seeking, Gendry (Joe Dempsie), escapes. Arya lies to the soldiers and tells them they’ve killed Gendry, pointing out the helmet they were using to identify the youth as belonging to a recent corpse.

It’s a tribute to the skill of all involved that they and we can manage to more or less keep everything straight as far as allegiances, names and, most importantly, what’s at stake. Despite some truly appalling behavior on Cersei’s part, Headey makes us feel sympathy for the noblewoman, who really is distraught over the idea of handing her daughter to a possible enemy.

The writing of the bedroom scene between reluctant Renly and pragmatic Margaery, as well as the playing of it by Anthony and Dormer, is a refreshing change from the histrionics this kind of plot twist has seen elsewhere. It’s unclear where this will go, but it’s a nice bit of common sense in what could be a fraught situation.

The big pleasure of the episode, of course, is watching Dinklage’s Tyrion conspire and manipulate and confuse. His tactics may be less than straightforward, but so far, we’re entirely on his side, as the people he’s maneuvering are duplicitous and ruthless themselves – Tyrion at least has some compassion. Besides, Dinklage is so at home and inventive in the role that, without overplaying, he makes Tyrion forever watchable.

“What Is Dead May Never Die” certainly underscores the undying fascination of GAME OF THRONES – we can’t wait to see the next play.